Bob Saget and John Stamos starred on Full House together from 1987-95 and later reprised their roles on Netflix's reboot, Fuller House

John Stamos is mourning the death of his longtime friend, Bob Saget.

Saget was found dead in his hotel room at the Ritz-Carlton in Orlando on Sunday afternoon following a performance in Jacksonville, Fla., Saturday night, the Orange County Sheriff's Office confirmed in a tweet. He was 65.

Following the tragic news, Stamos, 58, spoke out and paid tribute to his Full House costar.

"I am broken. I am gutted. I am in complete and utter shock. I will never ever have another friend like him. I love you so much Bobby," Stamos tweeted.

Throughout their time on the beloved sitcom, Stamos and Saget formed a tight bond, which turned into a decades-long friendship.

John Stamos and Bob Saget Go on Double Date with Their Wives: 'We Are Both So Lucky'

In 2017, Stamos and Saget showed how connected they were when they both proposed to their significant others just weeks apart. Stamos proposed to his model and actress girlfriend, Caitlin McHugh, on Oct. 22, while Saget asked TV host Kelly Rizzo to be his wife on Nov. 7.

Saget later told PEOPLE that the timing of their close proposals was unintentional, revealing that "John Stamos and I were texting ahead of time. We are incredibly close, and I knew that he was going to [propose] — sorry, Caitlin! — and he knew that I was going to."

The two would also often get together with their wives for occasional double dates.

"What can you say about someone you've loved for so long and want to spend the rest of your life with? But enough about @JohnStamos — We are both so lucky to have married these wonderful beautiful women," Saget captioned a photo of the foursome out for dinner in Los Angeles in January 2019.

Later that year, Saget revealed how much he loved his costar when he posted a tribute for Stamos' birthday beside a photo of them cuddling in bed.

"This is the manliest picture I could find of the two of us. I try to explain to people it was for your @projectcuddle video, but it is what it is," he joked. "You are the most wonderful brother anyone could wish for —You do so much to help so many – – even though you really didn't help me with the release of this video. Kidding!" 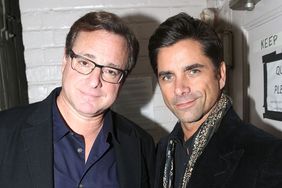