The legendary comedian rang in his 90th birthday with a trip to Las Vegas last week. Newhart attended The Beatles LOVE by Cirque du Soleil show at The Mirage Hotel & Casino.

Newhart, whose birthday was Sept. 5, brought his wife Ginny, three of their children and his son-in-law with him for the night out.

After watching the show inspired by the iconic rock band, Newhart made his way backstage to meet the cast of the production and pose for photos with the team.

Before attending the show, Newhart opened up about his milestone birthday during an interview with The New York Times, admitting he doesn’t feel 90 years old.

“My mind doesn’t [feel old]. I can’t turn it off,” he said before revealing his thoughts on the afterlife. “I think I know what’s on the other side, but I’m not sure. Maybe it just ends. Some people think you come back. Maybe I’ll come back as Shelley Berman and be pissed off at myself.”

“I think if you lived a good life, some people say it is rapture,” he continued. “You spend the rest of your life in a state of rapture. That’d be nice. What I’m actually hoping is there’s the Pearly Gates and God’s there and he says to me, ‘What did you do in life?’ And I say, ‘I was a stand-up comedian.’ And he says: ‘Get in that real short line over there.’ ”

The comedian also opened up about his 56-year marriage, saying his career in comedy certainly helped their relationship stand the test of time.

“I think laughter is the secret to the longevity of relationships,” he said. “If you can laugh you can get through it.” 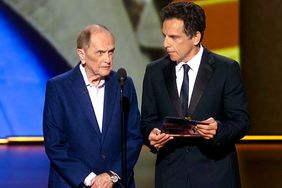