Chyna's allegations come after Kardashian, 30, accused the mother of his daughter Dream of cheating on him.

“Rob u did all this but u beat me up and try act it never happen!!!!!” the 29-year-old reality star wrote on Snapchat Wednesday. “U put hand on me I swear on god!!!! On my kids but I’m supposed to be quiet because you’re a Kardashian.”

A second message said, “The light will come to the light.”

Neither Kardashian nor Chyna responded to requests for comment.

Chyna’s allegations come after Kardashian, 30, accused the mother of his daughter Dream of cheating on him – despite his claims that he spent $1 million in a month to support her, including on jewelry and luxury cars.

In a series of expletive-ridden Instagram posts, Kardashian posted several intimate pictures of Chyna – many of which were later taken down.

The tirade began when Kardashian posted a video that appeared to show Chyna kissing another man.

“Hahahaha Chyna just sent me this video saying happy 4th of July what a crazy person,” he captioned the post. “Come spend time with your daughter instead of f—ing me and then this dude right after. U need help.”

In another post, Kardashian shared a screenshot of an alleged text conversation between him and “the dude Chyna got caught cheating on me with.”

In another highly graphic post, Kardashian shared a screenshot of an alleged text conversation between himself and Chyna, which included a photo of Chyna’s exposed genital area.

“This is from Chyna yesterday to me,” he wrote. “I never been so disrespected in my life. I just bought her 250K of jewelry yesterday. This woman is so disrespectful and I don’t care.”

Kardashian then shared a photo of the man allegedly at the center of the drama.

“And this the dude that posted a pic in the same bed Chyna and I made our baby in,” he wrote. “The house that I pay for. That robe i prob paid for. Imma send u messages from this dude asking to link with me or he gonna expose Chyna if I don’t help him get money cuz he can’t handle the bills to take care of Chyna. Lol. I pay lambo. Ferrari. Down payment on the rolls. Downpayment on your moms car.”

“I prob spent a million alone in the past 2 months. 90K necklaces. 70K watch. The Ferrari that u pretend u got yourself,” he continued. “Chyna I hope U find help and to this corn ball, u thirsty as f— for hitting me and begging to link with me and if I don’t help u get money then u gonna expose Chyna. Bro go back to your son who is at home instead u out here f—ing someone that everyone f—s including me. Lol. Clown. She everybody’s and it’s been that way. The disrespect in the bed that my baby daughter lays in. Chyna u literally lost on this one.”

Kardashian and Chyna’s roller coaster relationship began in January 2016, when the two went public with their romance. The pairing initially raised eyebrows due to Chyna’s complicated history with the Kardashian-Jenner family: Chyna shares a son with Kardashian’s sister Kylie Jenner‘s former boyfriend Tyga, and is also best friends with Amber Rose, an ex of Kanye West, who is now married to Rob’s sister Kim Kardashian West.

Kardashian proposed to Chyna in April 2016, and a month later, they announced they were expecting their first child. The two welcomed their daughter, Dream Renée, last November. PEOPLE confirmed the two had called off their engagement in February, and in the months since, the status of their relationship has remained unclear, though the two appeared to have been on relatively good terms. 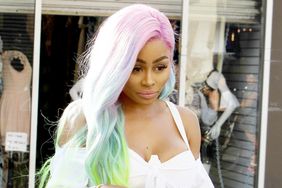 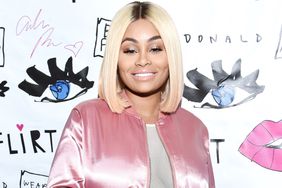 'I'm Done!': Blac Chyna Implies Rob Kardashian Is Behind Her Instagram Hack and Claims He Verbally Abused Her