15 'Billy on the Street Moments ' That'll Make You Laugh So Hard, You Cry

Billy Eichner's show, Billy on the Street, has had audiences laughing out loud for 15 years. It's jumped from being a stage show Eichner put on in the East Village of New York City, to Fuse, then TruTV, then FunnyorDie and now Netflix.

The show's many incarnations have only proven that Eichner is a true gem no matter the platform or medium. There's nothing like watching the actor — who has also made a name for himself on series like Parks and Recreation and American Horror Story, as well as in this year's The Lion King remake — scream at random passersby, sometimes with the help of a celebrity guest.

So, in no particular order (because it would be impossible to choose which clip is funniest) we present the Billy on the Street moments that had us in stitches.

When He Created a Meme by Running Around Yelling, "Let's Go Lesbians, Let's Go!"

Eichner ran around with a "pack of lesbians" playing his infamous "Lighting Round" game, and it ended up becoming a truly ridiculous meme involving Chris Evans and the rest of the Avengers cast.

And to celebrate the 15th anniversary of the show, none other than Captain America himself came by to remake the meme-able moment.

He also had Paul Rudd join them for a quick round of "Would You Have Sex with Paul Rudd?"

Amy started off telling people that they did a "nice job" while Billy screamed at them, and then the whole thing devolved into her matching his chaotic, angry energy — it's of the best things about this clip. Well, that and a woman getting so scared by Billy and Amy that she starts singing "Happy Birthday" instead of a Christmas carol.

Denzel was not, in fact, in Phantom of the Opera.

When He Tried to Get People to Name a Woman

Spoiler alert: He met a woman who couldn't name a single woman.

When Billy Brought Chris Pratt Around New York City, Trying to Get People to Recognize Him … and They Didn't

No, that's not Chris Evans, "Liam," or Josh Duhamel! Billy screaming quotes about Parks and Recreation costar Pratt's career as people on the street struggle to remember which Hollywood Chris he could be = genius.

Billy's usual bit is giving people a single dollar if they can answer a question for him, but with this bit the comedian turned the tables and had people guess the price of an item. The catch? If they guessed wrong, he smashed it to pieces.

When He Celebrated the 10-Year Anniversary of The Passion of the Christ Like This:

"That's right, The Passion of the Christ, b—-!" Eichner dressed as a pink Easter Bunny, throwing colored eggs on the street in frustration that no one loved the Mel Gibson movie as much as him is, in two words, something else.

The Giants won the Super Bowl against the Patriots in 2012, but all Billy wanted to talk about was Madonna's halftime performance.

When He Just Loved Meryl Streep So Much

To be fair, we feel the same way about Meryl as Billy, we're just not quite so loud about it.

Billy ran around with Rudd and a dollar, asking, "For a dollar, would you have sex with Paul Rudd?" The highlight of this segment is the two older women responding, "I would for nothing!" and "I'd do it for FREE!"

When Billy Tried to Get Tina Fey to List 20 Latino Celebrities and This Happened:

In a segment aptly called, "LaTina Fey," Billy tried to get the actress to name 20 Latinx celebrities … and she ended up on the street.

The icing on top of this ridiculous cake was that Wilde's prize was meeting "the newly reunited Danity Kane." Spoiler alert: It wasn't Danity Kane.

The Measles Are Back and So Are the Jonas Brothers

The Jonas Brothers reunited, providing a fabulous opportunity for Eichner to parade them around New York City getting fan reactions that he really didn't care about. Eichner screaming "WHAT ABOUT KEVIN?!" really is a huge mood.

When He Just Ran Around with Debra Messing

The shtick was just Billy running up to people and screaming, "It's Debra Messing, you gays!" Simple, yet effective.

Anything That Had to Do With Elena, But Mostly This Moment

Billy tried to play "Quizzed in the Face" with a woman, Elena, who was not having it, and she became a fixture on the show.

Thanks for 15 years of laughs, Billy! 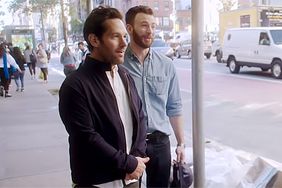 'Avengers' , Assemble! Paul Rudd and Chris Evans Team Up for a Hilarious 'Billy On the Street' Segment