Hader won the award for outstanding lead actor in a comedy series for his work as Barry Berkman on Barry.

Though it was Hader’s big moment, he used his time on stage to praise — and poke fun at — his co-creator, Alec Berg, for helping him direct the HBO series, offering honest feedback and “molding his performance” as an actor.

“I get asked a lot for the show, ‘How do you direct yourself?’ and I said, ‘There’s a lot of great directors on the show,'” Hader, 41, began his speech. “But the person I usually go to is my friend and co-creator Alec Berg.”

“So I want to thank you for molding my performance and I don’t know where I would be without you,” Hader sweetly added. “Love you, man.”

This is Hader’s third win and 20th nomination. The actor, who also serves as a creative consultant and producer on HBO’s Barry, won in the same category last year. He earned his first Emmy in 2009 for outstanding animated program for his work on South Park.

Hader received four nominations for Barry this year, including for writing, directing and producing. He was also nominated for outstanding variety sketch series as a producer for Documentary Now! 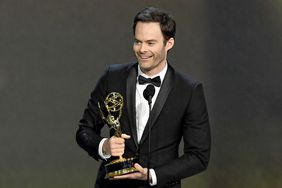