From the PEOPLE Archives: A Look Back at Beyoncé's First Surprise Pregnancy Announcement

"I have a surprise," the singer says, announcing that she and Jay-Z are expecting

Leave it to Beyoncé to steal the spotlight at Sunday’s MTV Video Music Awards.

But it wasn’t one of the pop diva’s signature show-stopping performances that had people talking. Instead, it was Beyoncé’s burgeoning baby bump, swathed in an orange gown.

Beyoncé, 29, posed for photos with her hands cradling her belly, teasing, “I have a surprise!”

Later, during the show, she performed “Love on Top,” introducing the song by telling the Nokia Theatre L.A. Live crowd, “I want you to stand up on your feet. I want you to feel the love that’s growing inside me.”

After her song, she unbuttoned her sparkling jacket and rubbed her stomach. The crowd roared.

“They told friends in the last month,” a source tells PEOPLE. “She’s never been happier. Seriously it’s all she’s been waiting for. And Jay is like an excited kid. They’re adorable.”

This will be the first child for Beyoncé and her husband of three years, 41-year-old Jay-Z, who performed “Otis” at the VMAs with Kanye West.

Looks like the talented singer is true to her word! 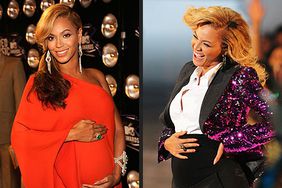 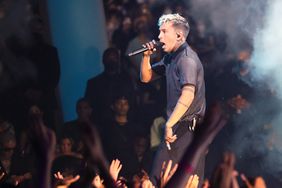