Three months after fans watched her get dumped by Bachelor Arie Luyendyk Jr., Becca is embarking on her own journey

Happy Monday, Bachelor Nation. It’s hard to believe that less than three months ago, we were watching in collective disbelief/horror as Arie Luyendyk Jr. proposed to his finalist Becca Kufrin — only to later change his mind and dump her for his runner-up Lauren Burnham, all over the course of a brutal three-hour finale.

Well, a lot has happened since then: Arie and Lauren are engaged and set to wed next year, and Becca, of course, is our new leading lady. And on Monday night’s season premiere of The Bachelorette, she proved that she hasn’t lost a single spark of what made her so very likable in the first place.

“I still have to pinch myself to be like, ‘Holy crap. You’re the Bachelorette, Becca,’ ” she says. “It’s so weird. I’m just your normal, average girl. All I did was get my heart broken on TV.”

Unsurprisingly, the premiere opens with a complete rehashing of the Becca/Arie/Lauren saga. It’s almost more icky to watch the whole thing unfold in hindsight, and Becca herself admits that it’s “tough” to put herself out there again. But at the end of the day, she’s determined to find love and she certainly isn’t going to let the most public breakup of all time get in the way of that.

Once we’ve squirmed our way through the awful Arie footage, we’re rewarded with something much more pleasant: Becca stops by the mansion to pop champagne with the three Most Valuable Bachelorettes: Kaitlyn Bristowe, JoJo Fletcher and Rachel Lindsay.

Not only are Kaitlyn, JoJo and Rachel the most recent Bachelorettes, but they have something even more special in common: All three of them ended up picking the guy that got their first impression rose — and first kiss. (That’s Shawn Booth for Kaitlyn, Jordan Rodgers for JoJo and Bryan Abasolo for Rachel, and all three couples are still together.)

“One hundred percent women are more intuitive,” says JoJo. “They know what they want and they trust themselves.”

“Please don’t edit this out: F— [Arie],” says Rachel. “You have to pull yourself out of the fantasy. You have to think about what will work for you in real life. And I think as women, we do a better job of that.”

Not only do they have some sage advice to share with Becca, but they also quite literally have a bundle of sage, which they burn together to cleanse the famed mansion ahead of Becca’s big night.

RELATED VIDEO: The Bachelorette‘s Becca Kufrin on How She Forgave Arie Luyendyk Jr.

Finally, it’s time to meet some of the 28 guys vying for Becca’s heart. Only a select handful get their own intro videos, and that includes Clay, a professional football player, Jordan, a male model and walking Zoolander parody, and Jean Blanc, who owns enough cologne to douse an entire army of men.

Meet All the Men Competing for Bachelorette Becca Kufrin’s Heart

There’s also Garrett, who seems perfectly adorable even though his Chris Farley impression is only mediocre, Joe, who owns a grocery store on the south side of Chicago and Colton, another football player who happens to look like a real-life Disney prince.

Download our Bachelorette bracket PDF now to play along with Becca Kufrin’s season of The Bachelorette, Mondays at 8 p.m. ET on ABC.

As per usual, we’re treated to a weird and wonderful variety of entrances, most of which will leave you cringing with secondhand embarrassment. (Like Mike, who thought showing up with a giant cardboard cut-out of Arie was a good idea. Don’t be like Mike, guys.)

“Meeting Becca for the first time was probably the hardest thing I’ve ever done in my entire life,” says Nick the attorney. Nick, didn’t you pass the bar?

But amongst all the gimmicks and props, the one that stands out by a mile is Garrett, who explodes ovaries everywhere when he shows up in a minivan full of soccer balls and booster seats because, one day, he hopes “to be a great dad and an awesome husband.”

As far as cocktail parties go, this one is pretty standard — but there is one surprise elimination halfway through the night. After realizing that one of the guys, Jake, is actually from her hometown, Becca decides to listen to her gut and send him home night one.

“I’m not 100 percent comfortable with knowing that we’ve met multiple times in the past and there not being any interest,” she tells him.

“Do you know that I have only one conscious recollection of meeting you?” replies Jake. Jake, see yourself out. (He does.)

Overall, Becca appears to click particularly well with two of the guys: Blake, a sales rep from Colorado that she previously met on After the Final Rose, and the aforementioned ovary-exploder Garrett.

Ultimately, she decides to hand out the first impression rose to Garrett — and surprise, surprise, he also gets the first kiss.

“Since he pulled up in that minivan, I was smitten by him,” she admits. “I loved it all. He’s so easy to talk to and so sweet, so to give him that rose… it felt so good.”

RELATED VIDEO: Becca Kufrin on Getting Engaged Again After Her Breakup with Arie — ‘This Time It’s Going to Stick!’

Finally, it’s time for Becca to hand out her first batch of roses. The sun has already risen by now, and the men shuffle into the living room to find out who made the cut. Farewell, Joe, Grant, Christian, Chase, Darius and Kamil. We hardly knew ya. 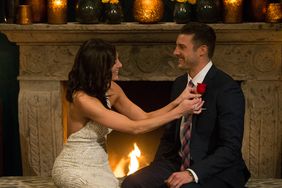