Zac Clark stepped out in support of his friend, who was honored with an award for the 2021 Addiction Professional of the Year

Zac Clark made his first public appearance since splitting from his ex-fiancée Tayshia Adams.

On Wednesday, the former Bachelorette contestant, 37, stepped out in support of his friend Carter Barnhart, who was honored with an award for the 2021 Addiction Professional of the Year.

Clark's organization Release Recovery, which he co-founded with Justin Gurland, shared a photo of the trio at the ceremony.

"Congrats to one of our closest friends, @carterbarnhart, on being honored as the 2021 Addiction Professional of the Year this morning," the caption read. "Carter is the CEO of @charliehealth and a strong female leader in our field! We love you CB."

Last month, PEOPLE confirmed that Adams, 30, and Clark ended their engagement. "Tayshia Adams and Zac Clark are no longer a couple," a rep for Adams told PEOPLE.

Adams met Clark when he competed on her Bachelorette season, which aired in late 2020. During the season 16 finale, she picked Clark as her final rose recipient and he proposed to her.

In February, Adams told Marie Claire that there wasn't a set time the pair had in mind for their wedding.

"At first, Zac was the person to be like, 'We could get married next week.' And I was like, 'Slow your roll.' I'd love to date a year," she told the outlet. "And now I'm like, 'You want to … maybe next month?' And he's like, 'Tayshia, slow your roll.' We're back and forth. But there's no timeline. It's definitely going to happen. I just don't know when."

The following month, Adams shut down breakup speculation after she was spotted without her engagement ring. "There's always weird rumors circulating around that I'm not wearing my ring and that Zac and I are broken up. I don't know what is happening, but you guys, I was holding my phone with my left hand," the former phlebotomist said on her Instagram Story.

In November, Adams and Clark ran the TCS New York City Marathon together. Following the race, Clark raved about Adams' performance in a touching Instagram post.

"I will be forever grateful to have had a front row seat to her performance yesterday, as will the thousands of others who cheered her along the way (the screams overpowered the Pearl Jam playing in my ears for most of the day)," he wrote. "The world is a better place today then it was yesterday because of you ….. KEEP GOING."

Speaking with PEOPLE ahead of the race, Clark said that the pair was eager to spend some quality time at the time. "We're really looking forward to kicking back after we get done and really spending some time here in New York," he said. 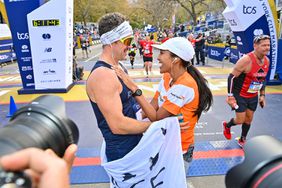