"My person is still out there, and I'm never going to apologize for how hard I love," said Blake Horstmann

For the first time since Becca Kufrin ended her relationship with Blake Horstmann, the two came face-to-face — and he had some questions.

During the season 14 Bachelorette finale on Monday, Bachelor Nation watched as Kufrin sent Horstmann home and gave her final rose to Garrett Yrigoyen. Although Horstmann has come to terms with the fact that his relationship with Kufrin is over, he wanted clarity on their split.

“I just wanted in that moment, I wanted her to know how madly in love I was with her for quite some time. It didn’t change anything, but I did love her,” Horstmann told host Chris Harrison before Kufrin was welcomed to the After the Final Rose stage and embraced her for the first time.

During their sit-down, he confirmed that he watched the season back and got some answers, but there was one “big one” that he needed closure on: “Was there a moment you knew? Was there something that happened where you decided it wasn’t going to be me at the end?”

RELATED VIDEO: Bachelorette Becca Kufrin on Her Future with Her Fiancé: ‘It’s Going to Be a Good Life!’

“Honestly, there wasn’t any moment that triggered the decision,” she assured him. “Especially those last two weeks when I knew we were down to the wire and this would be the biggest decision I had to make. I had to just evaluate both relationships and which one would fit best in my life. But there wasn’t anything that you ever said or ever did to make me question where you stood in our relationship. It was just what one is going to be the best for me at the end of this. … How would we handle certain situations if something happened? Where you got more in your head at times about things, it made me worried at times, about how we would handle certain things down the roads if someone were to get sick or something were to happen to a child. That’s when I just started to question the longevity of it.”

When he pressed whether there was something about their future that worried her, Kufrin told him, “You had been so solid. …. That last week to me, it wasn’t making the wrong decision. …. It was just me trying to sift through out interactions and looking into the future and seeing who was going to be the best for me in the long run.”

Kufrin did admit that she was “worried” when Hortsmann got into his head about things, which was when she began to question their relationship.

Still, he had “no hard feelings” about her decision and and said that “can’t be mad about” her following her heart.

“I still wanted you to never question your worth,” she told him. “I am sorry for how everything happened because I never wanted to hurt anyone.”

Ever the gentleman, Hortsmann told her, “You honestly have nothing to be sorry for. … I feel so lucky and fortunate that you were my Bachelorette, because I honestly can’t imagine anybody else.”

After wishing Kufrin “all the happiness,” he also had an important message for viewers.

“I don’t necessarily think there’s anything you could say that would help me move on. If people think that this is going to keep me down, they didn’t watch the season too closely. I’ve learned and I’ve grown from a lot in my life, and this will be no different. I’ll learn and grow for this. I’m not going to be scared now of falling in love again,” he said. “My person is still out there and I’m never going to apologize for how hard I love.”

Said Hortsmann: “I can see it in her face that she is happy.” 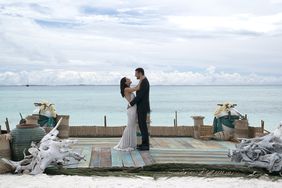