"Everybody definitely started at an even playing field," the elementary school teacher said during Tuesday's episode of The Bachelorette

With 23 guys left, Michelle Young kicked off her first week of Bachelorette dates on Tuesday.

"They feel genuine, they feel authentic," Michelle said in an on-camera interview of her remaining suitors.

Co-host Kaitlyn Bristowe arrived with the first date card and announced that Brandon J., Romeo, Rick, PJ, Will, Olumide, Casey, Danny, LT and Peter would be joining Michelle on the season's inaugural date.

Michelle brought along three friends for the day: fifth graders Mia, Riley and Kennedy. The students would be helping Michelle administer a series of tests to her men, starting with multiplication and then moving to a messy science experiment that pizzapreneur Peter couldn't quite execute.

Musical chairs came next, and last, spelling. A lot of the men felt that Peter appeared to be trying too hard to capture Michelle's attention, and Will even wrote Peter's name on his whiteboard when the students asked the guys to spell "narcissist."

The students informed the men at the end that they'd all received participation awards before heading to the afterparty.

Brandon J. admitted to Michelle, "I did fail a lot today, but I'm always going to try for you."

Michelle teased that she found that "terrible" even though he insisted, "That was from the heart!"

They kissed and Michelle told the cameras she felt "there were definitely sparks flying."

Michelle proceeded to play cornhole with PJ, and Olu told her she looked like Aquawoman in her sparkly blue dress.

Meanwhile, Peter pulled Will to confront him about the "narcissist" accusation from earlier. "I just thought that it was really inappropriate of you to call me a narcissist when I was completely defenseless," Peter said.

Will claimed he didn't mean anything by the comment. "I was just trying to have some fun," he said.

Peter called Will a "stunad" and Will said he didn't want to hear Peter talk about pizza anymore. "What else do you have to offer besides a slice, bro?" Will asked.

Michelle overheard the yelling and grabbed Peter to ask what had him sounding "very aggressive." "For him to call me a narcissist in an environment, not just in front of you but in front of the children as well, I thought that it was completely uncalled for," Peter said. "I really thought it was inappropriate."

Michelle pointed out that if a situation escalated between the two of them and "you're standing there screaming, nothing at that point's going to come across."

Peter deemed the outburst "really out of character" for him and apologized. "Get back into you, so I can see who that is and what that is," Michelle said.

At the end of the night, the Minnesota native handed out the group date rose to Brandon J. "I have to go with what I feel right now so Brandon — will you accept this rose?" Michelle asked him. And of course, he did.

Jamie scored the first one-on-one date of the season and he and Michelle took a trip to Joshua Tree National Park. They climbed a mountain to reach a picnic at the top. "Jamie was really good at encouraging me," Michelle said.

She and Jamie toasted with champagne and shared a kiss. "Cheers to being each other's rock," Jamie said.

Then Jamie opened up about his family life. "I definitely have a very different family upbringing and background from what I heard you describe," he told Michelle.

The biotech CEO said his parents had him young and never got married. His mother also struggled with mental health problems that affected Jamie and his sister. "Things kind of came to a head, I think around when I was 12 or 13," Jamie shared. "This one time I was just walking by the bathroom, and she comes up and she has a steak knife and she was trying to slit her wrists. And that just changed a whole mess of things. From there it was just like, this person can't be left alone."

So Jamie and his sister would alternate days they stayed home from school to keep an eye on their mom, to the point that he missed so many days that he couldn't graduate. When Jamie was 24, his mom died by suicide. "And that just kind of imploded pretty much my entire life," he told Michelle. "Nothing really mattered anymore."

Eventually, Jamie said he "actively" decided that "life's worth it, that people are worth it, and that relationships are worth it."

"I don't know you that well, but I'm so proud of what you've come through and how you conduct yourself," Michelle said after hearing about Jamie's background.

She gave him a rose and the pair ended the night with a private Caroline Jones concert. "Today couldn't have gone any better," Michelle told the cameras.

Before heading out on the group date, Joe learned about the death of his former basketball coach. And because of Michelle's love of basketball, the date consisted of shooting hoops with WNBA stars Dearica Hamby and Diamond DeShields.

The men played a game of five on five and the winning team won more time with Michelle at the afterparty. The losing team, meanwhile, had to head home.

Joe and his red team fell behind, and even though Minnesota Mr. Basketball 2011 picked up his game at the end, his team still lost. But Joe won MVP and got to attend the afterparty with the blue team.

There, Joe confided in Michelle about the death of his coach. "He meant a lot for me," Joe said. "He was always trying to just help me out anyway that he could. Felt like he was family."

As a former basketball player herself, Michelle knew how he felt. "I understand how much coaches can be such a big part of your life," she said.

They kissed and Michelle saw sparks fly. "I've never had chemistry with anybody this off-the-charts so quickly, that I was like, so into getting to know [and] attracted to," she said in an on-camera interview. "I can see him being my teammate and today I felt like he was my teammate."

That earned Joe the group date rose. "Tonight I feel like this person really pushed themselves and challenged themselves to open up," Michelle said before presenting him with the rose.

But the other guys on the date, with the exception of Nayte, had their concerns about Joe. "Joe's a very quiet guy," Martin said to the cameras. "He seems very reserved, but Joe's a silent assassin 100 percent."

The suspicions surrounding Joe and whether he and Michelle knew each other before coming on the show gained steam at the cocktail party. Some guys, such as Martin and Jamie, felt strongly about it, while others didn't really care. But Jamie even claimed a friend of his in Minnesota saw Michelle at a bar and told him "she's already booed up with a tall, light-skinned baller."

Jamie pulled Michelle to relay the rumor — and made it sound like all of the guys were as concerned about it as he did.

"There's been a whole bunch of talk today about this kind of feeling that maybe you might've known Joe before here," Jamie said to Michelle. "For me, personally, I just don't really care because I feel like whatever happened before getting here has nothing to do with me, but everybody else keeps feeling it. I think given that this entire journey is about authenticity and about trust and that that's the standard that's been set, I think that there's people out there that are questioning that."

Jamie went on to tell Michelle about his friend in Minnesota who had potentially linked her to Joe. Michelle said she needed some time to figure out how to respond to the situation, but that she did want to "squash it."

"I didn't have a relationship with Joe or anybody," Michelle told co-host Tayshia Adams. "Everybody definitely started at an even playing field."

Michelle told the group of men as much.

"What I want you guys to know is that first night when all of y'all walked in was the first night that I was meeting every single one of you for the first time," she began. "Joe and I exchanged a few messages quite a few years back … [we] kind of joke about it now, but Joe ghosted me after two messages and that was that."

She also addressed the "rumor about me being spotted with a light-skinned basketball dude before the show."

"Being a woman of color, you know, in Minnesota, any time I'm with a man of color, we're a couple, that's what everyone sees it as," she said. "I can have a romantic dinner with a white guy in a restaurant and nobody would say, 'Oh, they're a couple.' But because it's another Black man, we're supposed to be together and it's frustrating because I'm open to all of you. What I want to do for you guys is I want to open it up for questions."

No one asked Michelle any questions, but they wondered to each other who said something to her about Joe.

"I actually am shocked, because I haven't once talked about them two knowing each other," Rodney said.

Nayte felt similarly. "Somebody here told a story to Michelle, blew it completely out of proportion, and made it seem like the whole house is talking," he said.

Jamie didn't want to own up to it. "I'm not gonna jump in and be like, 'Yeah, it was me,'" he told the cameras. "I'm not dedicated to being the nice guy."

Kaitlyn and Tayshia informed the guys that Michelle wanted to cancel the rest of the cocktail party because she felt "emotionally drained."

But some of the men still wondered who among them had stirred up the drama.

"I don't know who conjured this up, but I feel like this person will make some kind of other mistake and will eventually be exposed," Romeo said in an on-camera interview. "What's still a big question mark in everyone's mind is, who spoke to Michelle?" 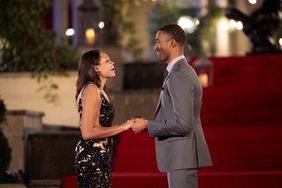 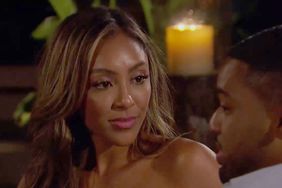