'Bachelorette' : Katie Thurston Details Past 'Situation Where There Wasn't Consent' When Having Sex

"For years I had a very unhealthy relationship with sex," Katie Thurston, known for her sex positivity, confessed on Monday's episode of The Bachelorette

Monday's Bachelorette episode picked up with the confusion over Karl's vague accusation about someone in the house not being there for the right reasons. Because of the claim, Bachelorette Katie Thurston didn't want to continue the cocktail party.

"I just don't have the right mindset to give some of the guys the energy and the time they deserve," she announced to the group. "I'm not going to give any more time to anyone else tonight. We're just going to go straight to the rose ceremony."

Before the rose ceremony, though, Greg pulled Katie to check on her. "I can't be confident in everyone else in that room," Katie, 30, told her first impression rose recipient.

The other men continued to urge Karl to come forward with the name(s) of who he distrusted on the show, but he didn't, which only led the guys to hope that Katie wouldn't give him a rose.

"I'm still very confused, but I'm going to follow my heart," Katie told her suitors ahead of the rose ceremony.

She doled out roses to David, Hunter, Conor C. and Mike P., but stopped after the 31-year-old virgin told her, "What Karl said wasn't the truth."

"Do you all feel the same way?" Katie asked. The men nodded their heads and Katie excused herself. She explained to co-hosts Tayshia Adams and Kaitlyn Bristowe that she wanted to keep Karl around, but after Mike P.'s revelation, she second-guessed herself.

So when she resumed the rose ceremony, Katie didn't give Karl a rose. Michael, Connor B., Quartney, Tre, Justin, Andrew M., Christian, Josh, Brendan, James and Aaron moved on instead.

Aaron, Quartney, James, Connor B., David, Justin, Thomas, Hunter and Brendan received invitations on the first group date of the week. They expressed concern, however, that Katie didn't sign the date card with a heart or "Love, Katie."

Upon arriving at the date, hosted by former Bachelor Nick Viall, they realized it would be a serious one. Nick told the guys they'd be opening up about their secrets and sharing any red flags they think Katie should know about. Hunter talked about being married and having two kids with his ex-wife; Tre divulged about choosing between love and his career; and Quartney discussed losing trust in a past relationship.

Thomas dropped the biggest truth bomb, though, when he admitted to having ulterior motives for coming on the show. He even owned up to going on a date the week before arriving in New Mexico.

"I couldn't sit here and look you in the face and say, 'Yeah, when I showed up to this place I was here for the right reasons,' because I didn't know who you were," Thomas confessed. "And worst-case scenario, I'd give it a shot and, yeah you can build a great platform, and that's just the honest to God truth, like my approach to this. I can sit here and tell you right now the best thing I ever did was lean into the potential of what could be here because the feelings that I have for you are real and I feel that it's reciprocated."

Connor B. followed up with a different kind of confession, about his days of heavily drinking while in grad school.

"I got really, really drunk and I picked a fight with my girlfriend at the time and then I went to a party and I got more drunk and I got high and I ended up cheating on her and kind of blowing up my entire life in one day," he shared. "And from there I read every self-help book I could find. I went to therapy."

Ultimately, "I used that to become a better man," Connor B. said.

Once all the men shared with Katie, she took her own turn to open up with her suitors. Katie revealed that 10 years ago, she'd been drinking on New Year's Eve and ended up "involved in a situation where there wasn't consent."

"I was in denial about what happened, so much still that I tried to form a relationship with him because I didn't want to believe what actually had happened," she continued. "And when that didn't work out, for years I had a very unhealthy relationship with sex. I didn't want to have sex, which affects a relationship. I didn't like talking about sex. And it's taken me a long time to get to where I am now. And being open and comfortable talking about it and loving myself and accepting things that I can no longer control."

At the afterparty, Katie called the date "transformative." She also used the time to press Thomas on the red flags he mentioned earlier. Although Thomas insisted he wanted to leave the show on the path to marriage, he didn't really give Katie any concrete answers. "She was asking probing questions and I wish I had more of a response for her," Thomas said in an on-camera interview.

Thomas wanted to right that wrong, so he paced in the hallway while Aaron talked to Katie about how his dad's death affected him. Eventually, he snagged more time with Katie. "I couldn't leave tonight without letting you know exactly how special I see you," Thomas told her.

Katie appreciated the extra time together. "I'm just happy you're here," she responded.

Of course, the other men didn't appreciate Thomas taking a second turn talking to Katie. "I told her that I was falling in love with her," Thomas told the group.

Katie gave Connor B. the group date rose in the end, but the guys' anger towards Thomas continued. When confronted again by the men, Thomas backtracked on what he said earlier about telling Katie he was falling in love with her. Aaron deemed Thomas a "cancer" and expressed to the cameras that he wanted to see Thomas leave.

Katie invited Michael A. on the one-on-one date, and before they went out traversing the desert in dune buggies, Katie flipped one over. But she walked away without a scratch.

After their adventure, Katie and Michael A. sat down to talk. "I felt like I was being selfish," he confessed of coming on the show as a single dad. "But my son, he deserves like, the happiest dad. And so it's more or less like, a pause in order to invest a little bit in myself."

Michael A. continued to tell the story of his past over dinner, recalling how he met his wife in college, they got married and then welcomed a son in 2016. Months after their son was born, Michael A.'s wife Laura got diagnosed with breast cancer. She died in 2019.

Katie presented him with a rose and felt excited about the possibility of the love they could share. "This could be the start of me falling in love with Michael," Katie said in an on-camera interview.

Michael felt similarly. "Since my wife passed away, I didn't think any of this was possible for me," he told the cameras. "But building this relationship with Katie, it's given me hope because she's someone I could love."

Back at the Hyatt Regency Tamaya Resort & Spa, the other men felt anything but love for Thomas. Hunter took it upon himself to call out Thomas before the second group date.

"It feels fraudulent, it feels like, almost like a campaign, like, you want to be Bachelor. I don't know what it is," Hunter said to Thomas in front of the group. "I mean, is that something you've thought about?"

Thomas didn't answer the question straight on, and Hunter pressed him again on whether he came on the show to pursue fame.

"Yes, coming into this, one of the thoughts on my mind was potentially being the next Bachelor," Thomas finally admitted.

"That explains a lot to me," Hunter retorted.

Though Thomas assured the other men he no longer had the idea of being the next Bachelor on his mind, they still felt unsure of his intentions and what it'd mean for the process going forward. But bringing that worry to Katie's attention would have to wait until next week. 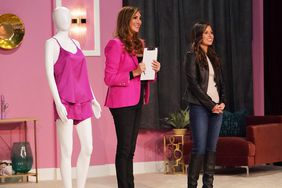