Leo Dottavio, who competed for Becca Kufrin’s heart on this season of The Bachelorette, has responded to sexual harassment claims publicized on social media by former Bachelor contestant Bekah Martinez.

“There have been some recent stories about me that have garnered attention and I want to address them,” Dottavio wrote in a lengthy note shared on his Instagram Story on Friday.

“I want to start by saying no one has ever accused me of sexual harassment. No one has ever come to me in any way and told me I made them feel uncomfortable,” he said. “However, I am not a perfect person nor have I ever claimed to be.”

He added: “Did I do things in college that I would be embarrassed about now? Absolutely. Was I a part of my culture, the times, movies? Yes.”

Dottabio went on to share that he has “grown as a person since college” and is “not the man I was 2 years ago let alone 14 years ago.”

“It’s important for women to speak out if they felt uncomfortable or harassed. I support that,” he continued. “If there was anyone I made feel uncomfortable why not come to me? I would love an opportunity to right my wrongs and speak to any woman that wants to tell me how and when I made them feel uncomfortable.”

“I want to take this an an opportunity to better myself and the treatment of women in my life,” he concluded.

Last week, Martinez shared screenshots on her Instagram Story of messages she claimed were sent to her by women accusing Dottavio of making unwanted sexual advances and sending unwanted photos of his genitalia in the past. These messages are currently saved in the “Highlights” folder of her Instagram Memories.

Martinez claimed she was sent those messages after sharing an image of a comment Dottavio made on an old Instagram photo, writing to a woman: “You need my big d—.”

“Some great guys from this season” she wrote on her Instagram Story, alongside a screenshot of the comment.

Martinez previously told the New York Post that she first saw the screenshot of the comment on Reddit, where it had been circulating since May. However, Dottavio told the same outlet that the comment had been photoshopped.

Explaining why she decided to post the messages, Martinez said, “I started posting the screenshots [of their messages] because to me, it’s not a coincidence that multiple women would be saying similar things about the same person.” She went on to claim that she was contacted by around a dozen women, who all shared “specific examples” of Dottavio’s alleged sexual harassment.

RELATED VIDEO: #AwShucks! Leo Impresses Becca During Oyster Date: ‘It’s Been a Pleasant Surprise to Get to Know Him’

Last month, Lincoln Adim, another contestant from Kufrin’s season of the popular ABC franchise, was convicted of indecent assault and battery — just days before the season premiered.

Adim was found guilty on May 21 of indecent assault and battery for groping and assaulting an adult female on a harbor cruise ship on May 30, 2016, Press Secretary Jake Wark of the Suffolk County District Attorney’s Office previously told PEOPLE.

According to Wark, Adim was sentenced to one year in a house of correction, with that term suspended for a two-year probationary period. However, the judge vacated Adim’s sentence and allowed him to withdraw his guilty plea in July, according to Boston Patch.

The Bachelorette finale airs Mondays at 8 p.m. ET on ABC. 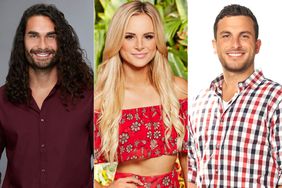