There’s a whole lot of drama unfolding in Bachelor Nation, and even former Bachelorette JoJo Fletcher is shocked.

While promoting her new CNBC show, Cash Pad, at the Television Critics Association tour, Fletcher, 28, spoke to PEOPLE about all the drama happening within the ABC franchise, including Tyler Cameron and Gigi Hadid‘s rumored romance.

“I’m blown away that this is even happening,” Fletcher said. “Tyler is probably feeling real good right now. It’s a crazy situation. I feel sad that it didn’t work out for Hannah and Jed. I feel like maybe she’s a little hurt by the Gigi thing, but at the end of the day, he’s a single guys, she’s a single girl. Everybody’s single here. It is what it is.”

After calling off her engagement with Jed Wyatt during The Bachelorette‘s finale last month, Hannah Brown, 24, was spotted spending the night with Cameron, 26. However, the Bachelorette runner-up has since gone on at least two dates with Hadid, 24.

On the latest episode of Rachel Lindsay and Ali Fedotowsky-Manno‘s podcast, Bachelor Happy Hour, Brown called the public nature of Cameron’s dates with Hadid “disrespectful” but noted that everyone involved is single — and allowed to mingle.

Speaking to PEOPLE, Fletcher shared her own advice for Brown as a former Bachelorette herself. (Fletcher was the leading lady for season 12 and is still engaged to her final pick, Jordan Rodgers).

“The great thing about Hannah, and the one thing I really loved watching, is her growth as a woman and that confidence,” Fletcher said. “It’s been really cool to see her do that. I would just say, stay true to who you are. Don’t feel disrespected. If it’s not fulfilling you, find fulfillment somewhere else. Keep doing you.”

“She’s a single girl and she’s living her life,” Fletcher continued. “This is going to be the best time of her life. It didn’t work out, she accepted it. Just don’t get caught up this sort of — if you start to feel like you’re losing yourself, go home and ground yourself. That was a big thing for me. The way that that show takes you to another level is wild. I think we’re all super blessed and super thankful for that platform, but it’s really important to stay grounded and get back to your roots and stay true to who you are.”

Turning to this season of Bachelor in Paradise, (which has revolved around drama between Blake Horstmann and Caelynn Miller-Keyes), Fletcher said she couldn’t see herself on the spinoff had things not worked out with Rodgers.

“It’s so dramatic,” Fletcher said. “Do you see how stressed I am thinking about it? I don’t think I could survive paradise. It’s so dramatic. I just feel bad. I haven’t formulated my full opinion.”

Fletcher and Rodgers, 30, are currently planning their wedding after being engaged for three years. Last month, they announced that they purchased their first home together in Dallas.

Although they have not yet set a wedding day, Fletcher is sure about one thing: fellow Bachelor season 20 alumna Becca Tilley will be standing beside her on her special day.

“Becca, she doesn’t know this, but she’ll be in my wedding,” Fletcher told PEOPLE. “I haven’t told her yet. I guess you’ll find out now. She’s one of my best friends!”

Tilley, 30, first appeared in season 19 of The Bachelor, where she vied for the heart of Chris Soules all the way to the finale, but lost out to Whitney Bischoff. She returned the next season, which also featured Fletcher, to woo Ben Higgins. However, Tilley was unlucky in love again, finishing in fifth place, while Fletcher ended as the runner-up. 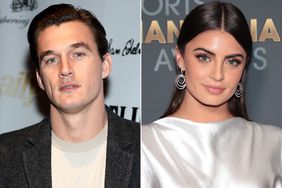