Tayshia Adams is clarifying the reasons that John Paul Jones moved to Los Angeles just before they announced their split.

In this week’s episode of the Bachelor Happy Hour podcast, Adams, 29, told host Rachel Lindsay and guest co-host Becca Kufrin that her ex had moved to her hometown of Los Angeles for his own career, not for their relationship.

“He moved here because he wanted to be an actor,” said Adams, who hit it off with Jones, 24, on season 6 of Bachelor in Paradise. “And because he was getting auditions and it was just easier for him to attend those as opposed to flying out. That’s why he moved here.”

“And he knew that story since the very beginning, so now people are like ‘Well, Tayshia, he just uprooted his entire life for you,’ ” Adams added.

Season 14 Bachelorette Kufrin said that the circumstances made Adams “look like the bad guy,” but she defended Jones’ reasons for moving west.

“I will say, coming off the show, your entire world is kind of flipped upside down, and you have so many opportunities and so many invites to all these great places in L.A., because everything happens here,” she said. “And I’m sure being a guy coming from the show, you have all this newfound notoriety and attention of course it’s fun and it’s shiny and exciting. So definitely I could see why he would move. Especially if he wants to be an actor to come to this area, because that’s where it’s all happening.”

“But for him to just say ‘Oh, I moved here solely for her.’ That does makes you look like the bad guy,” Kufrin added.

“It does,” Adams replied before adding, “Which is why I go back to communication. It goes back to ‘Are you listening to me?’ You know what I mean? So don’t make it seem like something else when it’s really not, and I’ve poured out my heart and told you how I feel.”

Bachelor in Paradise‘s Tayshia Adams and John Paul Jones Split: ‘We Are the Best of Friends’

On Wednesday, Adams announced that she and Jones had split six weeks after the BiP reunion.

“I know you guys have been asking about John and I recently, and as much as I like to keep my personal life private, I realize you have all watched and been a part of our journey from the beginning. Therefore, to stay true to that, I need to be open and honest with you in order to heal and move on,” Adams captioned a smiling selfie of the pair.

“John and I had something incredibly special. We fell for each other in Paradise, and everything was a whirlwind after that. When the show ended, I truly went back to Maryland to see if what we had was something we could build on without cameras, a production crew, and without feeling any pressure: to simply figure things out on our own terms,” she said.

Despite the breakup, Adams assured fans that she and Jones will continue to be friends.

“We are the best of friends and will continue to remain in each other’s life because regardless of the situation, we make each other happy💕💕” she concluded.

Jones left a simple red heart emoji in the comments section of the breakup post.

On the sixth season of BiP, Adams and Jones had an unlikely, whirlwind romance in Mexico. Ahead of Fantasy Suite dates, audiences watched as Jones professed his love for Adams — but she wasn’t there yet. Both devastated and in tears, they left BiP separately.

But at the Paradise reunion on Sept. 17, Adams admitted that she regretted saying goodbye to Jones on the beach. Cameras followed Adams as she traveled to Jones’ hometown in Maryland where they decided to give the relationship another shot.

Back in the studio, Adams and Jones said they were going strong. At one point, Jones even got down on one knee and recited the same poem he read to her on the beach. “I’m very happy,” she said.

Speaking with PEOPLE after the show wrapped, Adams and Jones opened up about their connection in Paradise.

“There would be conversations I would have off camera with John that were just monumental,” she said. “We would talk about our faith, his job, our families. There was so much more depth to him than running around in a Speedo laughing all the time and hair flipping his way through life.”

For his part, Jones never shied away from how strongly he felt about Adams.

“We had a solid friendship base, but then I learned we share the same values,” he said. “That’s what made me see the long-term potential.” 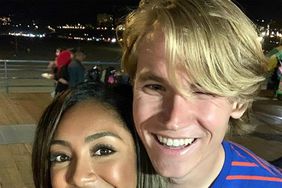