Bachelor in Paradise alums Jacqueline Trumbull and Jordan Mauger confirmed their relationship on social media Wednesday, both posting cozy photos together from their trip to the Burning Man Festival on Instagram.

“More desert than beach people I guess,” Trumbull caption a photo, poking fun at their time on Bachelor in Paradise.

In the photo, Trumbull and Mauger lean in for a kiss.

Mauger posted a similar photo to his own account, showing the two in a romantic embrace while wearing elaborate, festive costumes.

“The playa provides,” he captioned the shot.

Both Trumbull and Mauger appeared on season 5 of Bachelor in Paradise — though they didn’t meet on the show. Trumbull had come and gone by the time Mauger joined the cast for a short stay. And while it’s unclear how the two met outside of Paradise, they started posting photos together before the season ended.

Trumbull shared a series of flirty photos on Sept. 4 of the two at Burning Man (which took place from Aug. 25-Sept. 3) near Reno, Nevada.

“Jordan: ‘I’m not very good at giving compliments.’ Me: ‘I like your chest hair pattern and eye wrinkles.’ A couple o’ J’s,” she wrote.

And their relationship seems to be going strong. On Thursday, Trumbull shared an Instagram live video revealing Mauger was visiting her in New York City. The reality star later posted a photo of himself standing in front of the NYC skyline.

Trumbull competed on Arie Luyendyk Jr.‘s season of The Bachelor, but the Ph. D candidate left on her own accord when she realized she and Luyendyk Jr. wouldn’t last in the real world.

Mauger starred on the New Zealand Bachelor and was introduced to American audiences during Bachelor Winter Games, where he had a brief romance with Bibiana Julian.

And this isn’t the only couple to start dating after the show. Former Bachelorette contestant Clay Harbour recently revealed that he is happily dating Angela Amezcua, who spent the summer looking for her own happily ever after on Bachelor in Paradise after vying for Nick Viall’s heart on The Bachelor.

Harbour said the lucky couple were set up by Chris Randone. 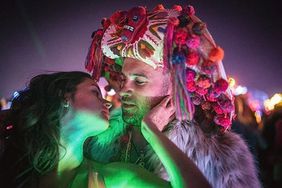