Demi Burnett is one half of Bachelor in Paradise‘s first same-sex couple — and proud of it.

After a new trailer for the upcoming sixth season of the summer spinoff teased a romance between Burnett and another woman, the Bachelor alumna tweeted a message to her fans: “Spoiler alert: I’m a queer queen.”

And she was flooded with support from her fellow franchise stars.

“And we all, bow down,” wrote Hannah Brown, current star of The Bachelorette. “Love you always and forever.”

“You are an absolute queen and I love you so freaking much,” tweeted her Bachelor in Paradise costar Caelynn Miller-Keyes.

“Spoiler alert… we love you, no matter who you love. Because love… is LOVE!!!” added fellow Bachelor alumna Elyse Dehlbom. “Proud of you and proud of your truth and the courage to share that with the world!! And this Cougar will come at anyone who doesn’t show you graciousness for your bravery!!”

In the trailer, which aired after Monday’s Men Tell All episode of The Bachelorette, Burnett, 24, proclaims her love for a mystery woman.

But she’s conflicted about her feelings, as evidenced by a steamy make-out session with Derek Peth in the hot tub.

“Last night, Demi and I had a really fun time in the hot tub,” he says. “That’s not something I should have to hide.”

“I just don’t want to lose you,” Burnett tearfully tells the woman. 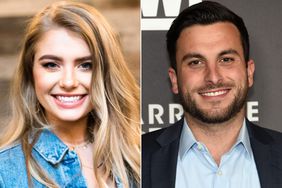