The former couple announced their split in December

Chris Bukowski might no longer be dating Katie Morton, but that’s not keeping him out of her Instagram comments.

The Bachelor in Paradise star, 32, left a flirtatious comment on his ex-fiancé’s latest post from Rome, Italy, on Thursday.

“comment your favorite place you’ve ever traveled to ✨,” Morton, 26, captioned a photo of herself sipping some white wine in the European city.

While several Bachelor Nation alums commented on the post — Becca Kufrin offered up, “my bed” — Bukowski’s comment was the cheekiest.

“Your apartment,” he wrote.

Bukowski and Morton were one of three couples to get engaged on the latest season of BiP, but announced after a rocky few months with twin Instagram posts in December that they decided to part ways.

“One of the many lessons this life has taught us is that it’s okay to be stubborn in the pursuit of happiness,” their joint statement began. “To fight for what is real and good, and that often times the hardest thing and the right thing are the same.”

“We’ve reached a point in our story where we agree it’s best to go our separate ways,” the former couple continued. “We have chosen to love and respect each other as friends because that’s the base of our relationship, and it’s what is most natural for us. We are incredibly thankful for the support we’ve received from our family, friends and everyone who supported us throughout our journey – from paradise to this moment.”

“We are grateful for everything that we’ve learned in this chapter, and are hopeful for what is to come in life and in love for both of us.”

Shortly after announcing their breakup, Morton opened up about the split on Dean Unglert and Jared Haibon‘s Help! I Suck at Dating podcast.

“There was a lot of distance,” Morton said. “We had some good times when we would see each other, but it was few and far between. I think it comes down to effort on both ends.”

Bachelor in Paradise‘s Chris Bukowski and Katie Morton Split: ‘Hopeful for What Is to Come’

Morton said that now, she feels “really at peace.”

“I’m happy about that. I think that the struggle was more within. Now I’m like, at peace. I don’t know how to explain that,” she said, adding that ultimately, she’s “really thankful” for her relationship with Bukowski. “I’m really thankful for Chris. He’s taught me so much as an individual and within myself I was able to see a lot of things too. I’m really thankful overall.” 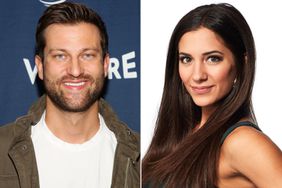