"We've been so close for the past three years, I just know her inside and out," Haibon told PEOPLE

Even if you hadn’t heard, it wasn’t hard to tell that Ashley Iaconetti and Jared Haibon are an item when the two stepped out in Los Angeles on Tuesday night.

After walking the red carpet hand in hand and posing for photos together, the two were inseparable at the annual Nylon Young Hollywood Party.

“There’s just this undeniable, magnetic force between the two of us that just is indescribable,” Haibon told PEOPLE shortly after kissing his girlfriend for the cameras. “Love conquered.”

It sure did. After three years of ups and downs, much of chronicled on Bachelor in Paradise, the two officially announced on Tuesday that they are a couple — and to a large extent, they credit their ability to compromise for each other.

“He’s the boyfriend who watches Say Yes to the Dress and rubs my back, but then again, I go see Avengers and Deadpool with him,” said Iaconetti, 30. “That being said, I kind of fall asleep on his lap during those movies.”

The two are so comfortable together it’s hard not to imagine them spending their future together. When asked if they have talked about marriage, the couple was open about the fact that they have definitely considered their future, but are happily enjoying their dating life right now.

“As soon as we started dating, we both knew that this isn’t just for us to date as boyfriend/girlfriend — this was more so we were going to date because we see a potential life partner in each other,” Haibon said. “We’ve talked about it but we’re just dating right now, we’re enjoying that. We literally just announced our relationship. The thing is, we’ve been so close for the past three years, I just know her inside and out. I know everything about Ashley.”

Iaconetti also knows Haibon inside out — and wishes there were more guys like him in general.

“All the girls hear him talk and lose their minds,” she said. “Everybody needs a Jared! I said it on Bachelor in Paradise, and it’s true because there needs to be more Jareds in this world.”

“I told her two years ago, one of my love languages was personal touch, and she was like, ‘Uh, this guy doesn’t know himself,’ ” said Haibon. “Now, she understands.”

“He gives me a lot of affection, that’s for sure,” she added. “And a ton of confidence.”

And that they finally ended up together is the biggest reason the couple can appreciate their rocky past.

“I think it’s almost romantic because it wasn’t easy for a long time,” said Iaconetti. “We just could not be apart.”

“We talk about what they potentially could look like,” Haibon said, adding jokingly, “I feel like we know what our kid will look like. It could go really good or it could go really bad. Between our features, we could have some serious pointy babies.”

“It’s funny, because looking back at old pictures of us as babies, we actually look like we could have been twins as 1 or 2-year-olds,” said Iaconetti.

Even though they’ve traveled together and had plenty of unique opportunities to get to know each other on and off-camera, they are happiest when they get to spend a night at home cuddling on the couch.

“Our favorite is just staying at home in sweatpants and a bottle of wine,” said Jared. “Postmates, cuddling on the couch, and calling it a night.”

“I love falling asleep on him,” chimed in Iaconetti.

“She fits well,” he added Haibon. “Like a puzzle piece.” 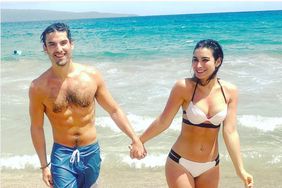 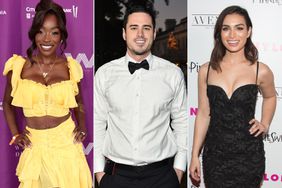