"I don’t exist to be classy for you. And I won’t be small or ashamed of who I am or what I do," Taylor Nolan argued in a passionate clip

Bachelor alum Taylor Nolan is slamming Arie Luyendyk Jr. for "sex-shaming" her on social media after the two got into a heated argument over politics.

On Friday, the Let's Talk About It podcast host posted a lengthy Instagram video in which she called out the former Bachelor for "belittling" and "bullying" her after she commented on one of his posts about the 2020 presidential election.

Nolan, 27, began the 12-minute clip by recapping her quarrel with Luyendyk Jr., which she said started when the race car driver and realtor posted an Instagram poll on Nov. 3 about who people would be voting for and writing, "Remember we are all United and it's OK to have different opinions that's freedom."

"How are you going to say were all united when the other people are literally voting against the rights of their neighbors? 'There's both people on good sides?' … It's bulls---," Nolan responded to Luyendyk Jr. on Instagram that night.

A few weeks later, Luyendyk Jr., 39, clapped back at Nolan by responding to one of her partnership posts on Instagram, a comment which she said made her feel "sex-shamed."

"This is part of what I do for my job, I do partnerships on Instagram. I also work as a sex therapist. I'm a licensed psychotherapist and I'm in school getting my PhD in clinical sexology," Nolan argued in the clip. "So, this is the post that he feels is something that he can put me down with. "[It's] sex-shaming and sex-negativity, which this is not a space for. Y'all know that I don't play with that s---. My whole passion and job, literally that I've chosen, is to fight against that."

She added, "This isn't just a regular post of me talking about sex toys or sex in general. This is a post specific that is a partnership post, that could hit me in my income, that could hit me in my ability to do partnerships, that there's specific shaming in how I'm making my money, which mind you is really no different than how he's making his money. Mine just maybe has a little more impact for people than his does."

A representative for Luyendyk Jr. had no comment when reached by PEOPLE.

Nolan went on to argue that the term "classy" is only used to "put down women specifically who don't fit into a thin, petite, agreeable, soft, feminine, white nature of what white men what a woman to be."

In the caption of the video, Nolan continued to call out the reality star for being unaware of his "privilege."

"I get it's hard for white men, specifically, to understand their privilege … because y'all really benefit from upholding white supremacy, s--- ya made it! So when someone, especially a BIPOC woman, asks for accountability or calls into question your problematic or harmful 'opinions' you're quick to belittle, shame, and deflect," she wrote.

"It feels threatening, and how dare I?! You want to put them back in place, make us be 'classy' for you. Well, sorry, I don't exist to be classy for you. And I won't be small or ashamed of who I am or what I do. Reacting to accountability, as if it's a form of oppression, with childish bullying, sex-shaming, and belittling is sad, shows all your privilege, and it DON'T work here," she concluded the caption, adding, "Good try though ✌🏽oh, and this is for you @ariejr 😘"

A representative for Luyendyk Jr. did not immediately respond to PEOPLE's request for comment.

Last week, the former Bachelor revealed that he has tested positive for the novel coronavirus.

On Nov. 26, he shared in a video on his Instagram Story that he was diagnosed with COVID-19 "nine days ago," saying that the experience has been "rough" for both him and his wife, Lauren Burnham.

"It's been rough. I gotta say, it's not been easy being separated," he said.

According to Luyendyk Jr., he's been isolating "on the other side of the house" away from Burnham, 29, and their 1-year-old daughter, Alessi Ren. 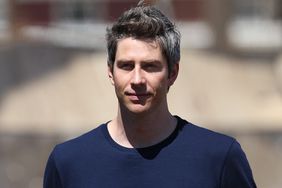