Kim, Khloé and Kendall have literally played the field

Introduced by Paris Hilton and then-boyfriend Matt Leinart, Kim and New Orleans Saints running back Reggie Bush quietly began dating in early 2007. In 2009 they split, citing busy schedules, though they reunited later that year and even adopted a dog together. But by early 2010 they took another step back from their relationship, with a source telling PEOPLE that Bush had "issues" with the reality starlet's busy life. In 2012 there were rumors of a reunion, but it never panned out.

McCants actually blamed his brief relationship with Khloé for his fizzling NBA career. The two were set up by Reggie Bush and dated in late 2008, calling it quits in January 2009. After that, McCants was traded from the Minnesota Timberwolves to the Sacramento Kings, where he lasted just one season and wasn't picked up by a new team.

According to the Charlotte Observer, McCants said his relationship with Khloé "gave people an opportunity to doubt his commitment to the NBA."

"There's no huge reason except their distance apart," a source close to the couple told PEOPLE, explaining that the decision was mutual. "With his season and Kim's filming [Keeping Up with the Kardashians] it just slowly split them apart."

The source added: "They tried to keep it as low profile as possible when they were together. They were acting as if they were single or just having fun, but they never were — it was the real deal."

Kim's mom Kris Jenner played matchmaker in 2010, setting her daughter up with the Armenian soccer player (at the time, he was on the L.A. Galaxy) following her split from Austin.

According to the New York Daily News, their date "didn't go as Jenner hoped," but after an episode of Keeping Up with the Kardashians centered on the storyline aired, Eskandarian tweeted about the experience.

"Thank you @KimKardashian for being a fun date and a down to earth person," he wrote. "I had a great time and have nothing but good things to say about u."

The Minnesota native was on the New Jersey Nets (now the Brooklyn Nets) when he and Kim wed in 2011 after about nine months of dating. She famously filed for divorce from the basketball player 72 days after their lavish wedding.

In 2011, after just one month of dating, Khloé married Odom, who at the time was playing basketball for the Los Angeles Lakers. The two documented their newlywed life on an E! reality series, Khloé & Lamar. But in 2013, the couple's marriage began to show signs of serious strain after the NBA star was hit with cheating accusations in July. A month later, he was arrested for driving under the influence, followed by a stint in rehab. After months of speculation about Odom's substance abuse issues, it was clear the marriage had fallen apart — and by December, Khloé filed for divorce.

In October of 2015, Odom was found unconscious in a Nevada brothel, and Khloé, still legally his wife, rushed to his side and called off divorce proceedings. Though they spent time together throughout his recovery, she re-filed for divorce in May 2016.

After hanging out in December 2013, Khloé and Kemp, then a Los Angeles Dodgers outfielder, maintained they were just friends, and no one ever confirmed relationship rumors.

"They are just friends and have been for a long time," a source told PEOPLE of the relationship buzz, spurred by the baseball star's Instagram post of Kris Jenner's Christmas tree. "Khloé is absolutely heartbroken right now [over Lamar] and dating someone is the last thing she's thinking about."

However, another Kardashian insider added: "It could be heading [romantic] in the future."

The pair had sparks flying on a 2014 dinner date and subsequent get-togethers, but weren't seen much together after that. Fast-forward to 2017, when a chance run-in at a Bentley dealership turned into Kendall sitting courtside at the Memphis Grizzlies player's game and joining him for dinner and a night at the clubs. However, any inkling of a romance ended there.

In May 2015, Khloé and the former Los Angeles Lakers great — Vanessa Williams's ex-husband — went on a late-night dinner date. But that was that, and when Fox was asked about Khloé by paparazzi, he simply replied, "Khloé's a good friend," according to E!.

Kendall and the Formula One racer happily hit the streets of New York City in 2015, and she even went to Monaco to watch him race that May in the Formula One Grand Prix. He deflected dating rumors to E!, though, saying, "Me and Kendall have been friends for a while, so we're just friends." But he did add, "She's doing incredible, she's very focused, very level-headed, and she's just — for such a young woman, she's very grown up."

In July 2015, Khloé and the Houston Rockets star were seen spending more time together, relaxing poolside in Las Vegas and hitting the gym in L.A.

Opening up to PEOPLE that October about their relationship, she said they were taking it day by day. "His season is starting, and I'm just allowing everything to unfold. If it's ever too overwhelming [for him], then I understand that as well."

But by February 2016, the pair had gone their separate ways — with Khloé implying that Harden hadn't been monogamous during their time together.

In 2016, PEOPLE confirmed the model was "secretly dating" Clarkson, then a player for the Los Angeles Lakers. "He is super sweet and a total gentleman and Kendall loves that," a source told PEOPLE of the young basketball pro. But by the end of that year, the pair appeared to have fizzled out.

Khloé's current flame is Thompson, a basketball player with the Cleveland Cavaliers. The two went public with their relationship in September 2016 — while his now-ex Jordan Craig was still pregnant with his baby — and in April 2018, welcomed daughter True. But two days before True's birth, photos and videos surfaced of Thompson allegedly getting close to an unidentified woman at an N.Y.C. lounge the previous weekend. TMZ also posted footage recorded in October 2017 allegedly depicting Thompson kissing one woman while a different woman groped him at a lounge in Washington, D.C.

"Tristan has been consistently cheating on Khloé," an insider alleged to PEOPLE at the time. "He's a serial cheater. And there will be more women to come out of the woodwork." So far Khloé has stayed in Cleveland with her man, relishing new motherhood, but is "still figuring out" her relationship with Thompson, a source told PEOPLE.

Kendall and the Los Angeles Clippers star began hanging out in the summer of 2017, shortly after he split from the mother of his two children, Brynn Cameron, a former college basketball player.

Though they didn't talk about their relationship, she was often spotted courtside at his games. A source told PEOPLE, "Kendall is very happy with Blake. They started out more like friends, and then it was very casual. But it seems more serious lately. When they are not together, they keep in touch over the phone. Her family has accepted Blake. They are spending time getting to know him."

By February 2018, the two had "cooled off," in part because Griffin was traded to the Detroit Pistons.

In June 2018, Kendall moved on from Griffin with Philadelphia 76ers standout Simmons, an Australia native. But their burgeoning relationship wasn't without controversy: The athlete had most recently dated singer Tinashe, and the crooner's brother took to Twitter to claim Simmons cheated on his sister with the Jenner sis. Neither Kendall nor Simmons confirmed the relationship, though they were spotted at Hollywood hotspots including Nice Guy, the Beverly Hills Hotel and the Waldorf Astoria Beverly Hills.

One week after the sightings, Kendall was seen possibly kissing Gigi and Bella Hadid's brother Anwar in New York City, but one week after that, was spotted back with Simmons in L.A. 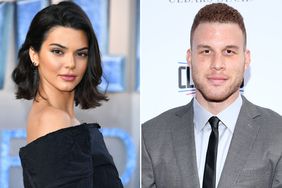 Kendall Jenner and Blake Griffin 'Cooling Off' as He's Spotted with a Mystery Woman: Source 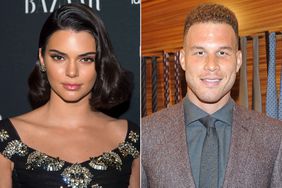 Kendall Jenner and Blake Griffin Have 'Cooled Off' Since His NBA Trade, Source Says 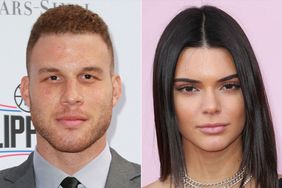