The actress, who shared the role of Michelle Tanner with sister Mary-Kate Olsen on the '90s series, posed with Saget on Friday in NYC

Want another Full House reunion? You got it, dude.

Ashley Olsen reunited with her former onscreen father Bob Saget on Friday to support the actor’s stint in Broadway’s Hand to God.

The 29-year-old and her twin sister, Mary-Kate Olsen, shared the role of Michelle Tanner on the popular ’90s sitcom, which is getting a reboot on Netflix next year as Fuller House.

Saget is taking on the role of Pastor Greg in the Tony-nominated musical for the show’s final nine weeks on the Great White Way. Olsen posed with Stamos and several members of the cast at the New York City theater.

Filming is already underway on Fuller House with almost all of the series’ original stars returning – save for the Olsens.

After initially declining to reprise their role, Netflix’s head of content acquisition, Ted Sarandos, said that the twins were “teetering” on whether or not to return in July.

“They’re fully welcome anytime,” John Stamos (aka, Uncle Jesse) said in September. “There was a lot of miscommunication in the press They have big lives; they haven’t acted in a while. But I love them dearly and they’re always welcome on the show.” 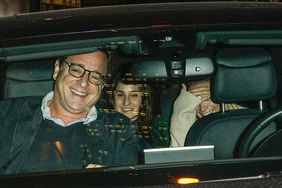