The Bachelor lovebirds (and parents-to-be!) tied the knot at Haiku Mill in Maui on Jan. 12

They're married! Arie Luyendyk Jr., 37, and Lauren Burnham, 27, exchanged vows in Hawaii on Jan. 12, 2019, 10 months after getting engaged on The Bachelor‘s After the Final Rose special following the controversial finale, when he proposed to final pick Becca Kufrin.

“Love is not always perfect,” the former race-car driver told PEOPLE in March. “Everyone finds each other in a different way. It’s not always a fairy tale, but as long as Lauren and I have each other, we’re happy.”

The couple is expecting their first child — a girl! — in June.

The Bachelor host Chris Harrison was on hand to celebrate the happy couple — and officiated the ceremony, too.

"It was an incredible wedding week," he wrote on Instagram alongside a series of photos. "My blessings and prayers to Mr & Mrs Luyendyk and baby Luyendyk on the way. For now it’s Aloha!"

This was just the latest in a series of Bachelor Nation weddings Harrison has officiated (yes, he's ordained!).

"CHEERS TO LOVE," Catherine Giudici Lowe wrote on Instagram. "Congratulations to Lauren and Arie (and Baby Girl Luyendyk) on making it official tonight! So honored to have witnessed it and to have celebrated you (Also, have you seen this stunning of a bride before?!?)"

The groom got emotional as his bride walked down the aisle ...

After the big bash in Maui, the newlyweds headed to the island of Kauai for a relaxing honeymoon.

“It truly was a joy to be part of their long and sometimes arduous journey,” Neil Lane, The Bachelor‘s go-to jeweler, told PEOPLE of helping the pair pick their wedding rings. “But like most romantic novels, love triumphed in the end.”

“It’s set with almost 35 French cut diamonds down the center and surrounded on all three sides with over 200 smaller round diamonds,” he shared.

The total weight of all the diamonds is about 3.9 carats, Lane said.

Luyendyk’s design shares a special connection with another Bachelor couple — it’s the same band that former Bachelor Sean Lowe has!

"It’s been an incredible week full of love and laughs," Harrison wrote on Instagram.

Revelers included Bachelor National alumni like John Wolfner (third from left), who competed on season 8 of The Bachelorette.

Wolfner's wife Rachael posted this shot of the happy couple, and said the affair was "so magical."

Gale was also lucky enough to snag a shot with the bride and groom.

Arie and Lauren selected VOW as their wedding charity of choice, encouraging guests to donate to the cause. VOW stands up for girls’ rights and against child marriage.

“It was an amazing day. Arie and Lauren wrote their own vows and both of them got choked up,” a source told PEOPLE.

Guests sipped drinks by LeVecke Wine & Spirits, which uses sweet pineapples to craft unique Hawaiian spirits from their Maui Gold Pineapple Farm. The wedding party toured the pineapple fields days before the wedding and then took part in a Hali’imaile Distillery tour and tasting. Maui Gold Pineapples were also used as bar garnishes and gifts for the attending guests. Also at the bar were Fancy Pufs, an organic cotton candy used as champagne toppers.

It was a Bachelor family affair, with producers including (from left) Marco Franzitta, Megan Firestone and Peter Gust in Hawaii for the nuptials.

"Day 1 of forever as Mr and Mrs Luyendyk! Love you guys," Firestone wrote on Instagram.

Before the festivities, Harrison got lei'd with the bride and groom.

After the wedding, the newly minted Luyendyks (with Harrison between them) donned 'Just Mauied' shirts.

One day before they married, the groom summed it up on Twitter: "Life with you is all sunsets and rainbows," he wrote. 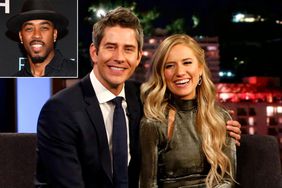 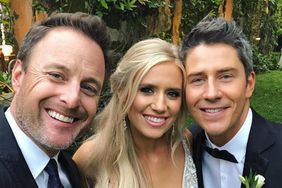 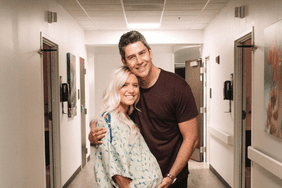