Anna and Josh Duggar Reveal They're in Marriage Counseling: It's a 'Long Road to Rebuild a Healthy Relationship'

The couple announced the news on Friday

Josh Duggar and his wife Anna Duggar have revealed that they’re in marriage counseling following their difficult year.

In a statement on the Duggar family website Friday, the couple began by thanking fans for prayers and encouragement.

“As we enter into a long family weekend together, we want to thank each of you for the prayers, love and encouragement you ve sent our way,” they said.

The couple then revealed that since Josh’s stint in rehab had ended, they have been “working with a professional marriage and family counselor to take important steps toward healing.”

“It isn’t easy and some days are very difficult. It is a long road to rebuild trust and a truly healthy relationship,” they added.

In August, Josh, 28, admitted to having a pornography addiction and being unfaithful to his wife, with whom he shares children Marcus, 2, Mackynzie, 6, Michael, 4, and Meredith Grace, 7 months.

“We are very thankful for God’s forgiveness, grace and help, as it is our strength and guide to rebuilding our lives. As the future unfolds, we are taking one day at a time and we are grateful for your continued prayers for both of us and our sweet children,” the statement concluded.

Josh sought treatment at a faith-based rehabilitation center in Rockford, Illinois, in August following his revelations about his addictions. The stint in rehab came just months after the family was rocked by reports that Josh had inappropriate contact with underage girls as a teenager.

In a March episode of Jill & Jessa: Counting On, Anna tearfully spoke about visiting her husband in rehab.

“This visit was great because it definitely gives a lot of hope, but also the weight of everything is there and so it definitely drives me deeper to my faith,” she said. 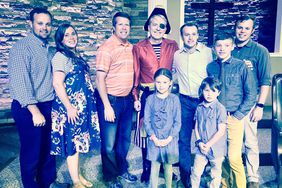