America Ferrera Says Her Final Superstore Episode Is a 'Tearjerker': 'Have the Kleenex Nearby'

"It was super surreal," Ferrera says of her last day on the set of Superstore

It's almost time to say goodbye to Amy on Superstore, and America Ferrera believes that when it comes to her final episode on the show, fans of her character and Jonah (played by Ben Feldman) "should have the Kleenex ready."

"It's an emotional one for sure," Ferrera, 36, tells PEOPLE of her character's upcoming departure from the show, whose sixth season premiered on Thursday night. "The show is a comedy and most of the times, stays very true to that DNA. But this episode of Amy leaving is definitely a tearjerker — was for me, was for me on set, was for me while we were filming."

"So, I think people should people who are fans of the show and fans of Amy and Jonah, in particular, should have the Kleenex nearby," she adds.

Calling her last day on set "super surreal," Ferrera says, "I just feel like I just like numbed out and didn't really like accept that it was coming to an end until the very last minute. When they called wrap, I think I remember like gasping as if I wasn't fully aware that this was my last day and my last shot, which I was obviously."

"But there was something about when they called wrap on me that just felt like a complete surprise to me," she adds. "And then I just felt all the feelings all at once, but I had been sort of avoiding feeling for a while and I was supposed to be done in March, but because of the pandemic we got shut down. So it's sort of been this prolonged goodbye."

"So I haven't really been willing to let the feelings in because it felt like it was never going to happen," she says. "So I just waited until the last minute. And when they called wrapped on me, that's when all the feelings and the tears came, but it was sweet and I felt very, very loved by my cast and crew."

With COVID-19 altering the filming schedule from season 5, including a finale that production "never got around to shooting" due to the pandemic, it also meant Amy's goodbye had to be reworked as well in season 6.

Of season 5's production, Ferrera says, "Our penultimate episode ended up being the finale and then the finale as written didn't really work for the top of the season, because it was so much to deal with, particularly like the reality of employees at a big box store in the midst of a pandemic."

And when it comes to what Ferrera will most on the set of Superstore, it's the "laughing."

"I feel like for five years, my job was to show up and make people laugh and laugh myself with people I loved working with," she says. "I don't know that I ever have laughed so hard on any job before. So, I'm gonna miss that being a part of my daily life. I hope that there will be other things that make me laugh, but I don't know that I'll be laughing as much or as hard as I did on the set."

Ferrera previously shared the news of her departure on Instagram in February, writing, “The last five years on Superstore have been some of the most rewarding, enriching and enjoyable years of my career."

'Producing, directing and acting with this wonderful cast and crew has given me opportunities to grow as a person and storyteller," she added. "I’m so grateful to my partners at NBC and Universal Television for the support and belief they have always placed in the show, and I’m most thankful to the brilliant Justin Spitzer for creating the funny, smart and relevant world of Superstore and inviting me to be a part of it.” 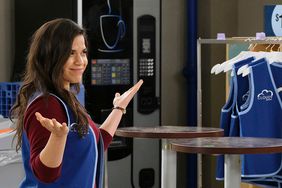 America Ferrera Will Return to 'Superstore' for Series Finale: 'A Joyful and Bittersweet Goodbye'

Norman Reedus on His Final Day on 'The Walking Dead', What He Gave — and What He Took

'This Is Us' ' Penultimate Episode Made Mandy Moore 'Throw Up': 'So Beautiful and Upsetting,' She Says