Amelia Gray Hamlin and Scott Disick have been linked since October

Amelia Gray Hamlin and Scott Disick's romance is continuing to heat up!

The DNA designer, 20, shared a candid photo of the couple embracing on her Instagram Story Tuesday and captioned the snap with a simple heart on fire emoji.

In the pic, Disick sported sunglasses as he stared at the camera while a smiling Amelia, who had her arm wrapped around her beau, was captured covering her mouth with her hand.

Recently, Disick, 38, posted a shot of the couple with his youngest son, 6-year-old Reign.

"Great night," the Keeping Up with the Kardashians alum wrote on his Instagram Story alongside a photo of the trio posing on a dock. "Just a little smelly for Reign out on these old docks."

Following his August 2020 split from ex-girlfriend Sofia Richie, Disick was first linked to Amelia in October. Since making their relationship Instagram official in February, a source told PEOPLE that "they really don't feel the age difference" between them.

Amelia is the daughter of actress and Real Housewives of Beverly Hills star Lisa Rinna and actor Harry Hamlin. On a recent episode of RHOBH, Rinna, 58, said that she was "nervous" about the pair's relationship, but believed that it was likely a "phase."

"My feelings about it, I must confess: the issue that's the most enduring is the age difference, which to me is odd," said Harry, 69. "But, then again, every time I think of that, I think of myself and Ursula Andress. I was 14 years younger than she when we had [our son] Dimitri, so I can't really complain, right?"

In addition to Reign, Disick shares son Mason, 11, and daughter Penelope, 9, with ex Kourtney Kardashian. They split in 2015 after dating on and off for nine years.

Kardashian, 42, has been linked to Travis Barker since January.

During the Keeping Up with the Kardashians reunion last month, Disick and Kardashian gave each other their blessing in their current relationships.

"Whoever would make him happy, I would give my blessing," Kardashian said as Disick added, "I think if you really love somebody, you want them to be happy no matter what. So I do give her a blessing to be happy." 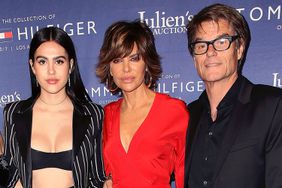 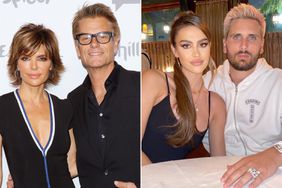