Viewers called the new Insatiable trailer "disgusting" and "toxic," but Milano insists it is "addressing (through comedy) the damage that occurs from fat shaming"

Netflix’s newest dark comedy, Insatiable, is being accused of fat-shaming — but star Alyssa Milano insists the show is actually tackling the topic head-on.

The series follows former Disney darling Debby Ryan as a high school student named Patty who was bullied relentlessly about her weight. After an incident leads to her jaw being wired shut over the summer, Patty shows up for the first day of her senior year looking rather different — and thirsty for revenge against anyone who was mean to her.

After the new trailer was released on Thursday, the show faced significant backlash, with critics accusing the show of fat-shaming and calling it “disgusting,” “lazy” and “toxic.”

Milano, who plays the wife of Patty’s lawyer, tweeted that the show hopes to confront the issue of bullying, not create more of it.

“We are not shaming Patty,” she writes. “We are addressing (through comedy) the damage that occurs from fat shaming. I hope that clears it up.”

She then refers to an article in Teen Vogue about the show.

Ryan hasn’t addressed the backlash directly, but she too pointed her Twitter followers to the Teen Vogue article and posted a screenshot of a highlighted section that reads: “When she returns to school, everyone’s stunned by her physical change. Problematic? You bet. After all, if someone’s treatment of you is rooted in how your body looks, that says a lot about them, not you. Attuned to that, Patty sets out on a quest to make everyone pay for how they treated her (even if you really should just let karma deal with the wrongdoers in its good, sweet time).”

The show’s writer and executive producer, Lauren Gussis, describes Patty as inspired by her own “formerly bullied teenager.”

“I really felt like it was important to look at [bullying] head on and talk about it,” Gussis tells Teen Vogue. “I’m hoping that if I’m gonna lay out all of my pain for humor, that I’m gonna make at least one person feel less alone. Hopefully a lot of people through the laughter will be like, ‘Oh my God, I’m laughing because I relate. I’m not laughing at, I’m laughing with.'”

Insatiable premieres on Netflix on Aug. 10. 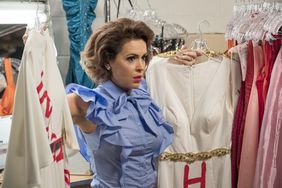