The longtime Jeopardy! host revealed the news of his pancreatic cancer diagnosis in March

Alex Trebek‘s wife of 29 years, Jean Currivan Trebek, is speaking out for the first time since her husband announced his diagnosis with stage 4 pancreatic cancer in March.

In an exclusive interview with SurvivorNet, which is the world’s first video and streaming platform dedicated to cancer prevention and treatment news, Jean, 54, talked freely about how she’s been relying on her faith, Religious Science (which incorporates ancient healing practices like sound healing, mediation and Reiki) to get through this difficult time.

“Just ask the universe, ‘What’s the next step for me?'” she said when asked what sort of advice she’d give to anyone going through an equally tough time. “The universe will always respond. I am absolutely sure that we live in a benevolent universe that is always conspiring for our highest and greatest good.”

Jean — who married her Jeopardy! host husband in 1990 and with whom she shares son Matthew, 29, and daughter Emily, 27 — is also a practiced and professional sound healer herself. She told the publication she often uses a combination of crystal bowls and her voice to help people heal.

“It’s like how when a mother sings a lullaby to her baby, it’s the intention in her voice that is calming the baby,” she said. “She’s singing the words of live and beauty to this little baby and the baby feels that in the vibration of her voice.”

Jean is also the founder of the spiritual blog insidewink.com, a website dedicated to helping readers break negative cycles, read and share feel-good stories or affirmations, and find peace within themselves. She told SurvivorNet that the combination of practicing Religious Science, plus running the blog, comes from a place of self-love, but that it can also buoy the spirits of those around her, including her husband.

“It comes from a place of love, because I want to uplift him,” she said. “When I keep my own self buoyed and enjoying my life, I can actually share that with him. He can look at me and have a sense of ‘life is beautiful; my wife is doing something good.”

“It was something that really spoke to me,” she said. “I felt at home when I got there.”

During his cancer ordeal, Alex, 79, has also often expressed how much he’s appreciated the ongoing outpouring of love and well wishes from fans around the world. In May, he told PEOPLE that he had been responding extremely well to his first round of chemotherapy, and that he believed in the power of prayer.

“I’ve got a couple million people out there who have expressed their good thoughts, their positive energy directed towards me and their prayers,” he said. “I told the doctors, this has to be more than just the chemo, and they agree it could very well be an important part of this.”

He added, “I’ve got a lot of love out there headed in my direction, and a lot of prayer, and I will never ever minimize the value of that.”

In September, he announced that he was once again undergoing chemotherapy.

“I was doing so well and my numbers went down to the equivalent of a normal human being who does not have pancreatic cancer, so we were all very optimistic,” he said on Good Morning America. “They said, ‘Good, we’re going to stop chemo, we’ll start you on immunotherapy,’ and I lost about 12 lbs. in a week and my numbers went sky-high, much higher than they were when I was first diagnosed.” 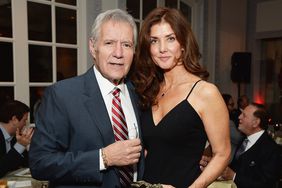