"It was hard for it to sink in for all of us. They had to pick us up off the floor," Alaskan Bush People's Billy Brown says of being told his wife Ami is cancer-free

Billy Brown was doing his best to stay positive as he watched his wife go through painful radiation and chemotherapy treatments, but he couldn’t help but worry about the toll her battle with advanced lung cancer was taking on her body — especially her throat.

“A sucker was all she would eat for a while, and then she got to the point where she couldn’t even swallow that. She was down to 77 lbs.,” says the Alaskan Bush People patriarch, 65, who is featured in the current issue of PEOPLE (on stands Friday) alongside Ami, 54. “Her heart just couldn’t take it anymore. She was just a few pounds [away] from dying.”

But now, after receiving the results of her recent scans on Dec. 21, they were told Ami’s cancer — which had spread throughout her chest and back — was gone.

“It was hard for it to sink in for all of us. They had to pick us up off the floor. It was like when we were told we were having a girl after five boys,” Billy says of hearing the good news. “It was like, are you sure? It was fantastic.”

Now the reality star — who has seven children with Ami — opens up to PEOPLE about how his wife’s diagnosis rocked his family last spring, how he helped her through the pain, and what the plan had been if her condition had not improved.

What were you thinking when you were called in to hear the results of her recent scans?
We went in and talked to the doctor, and we were solemn when she walked in, to be honest with you. Nobody expected the news to be that good. But she didn’t make us wait or anything. She said, “There’s nothing in there. We can’t find any sign of it or anything.” I’d usually walk out of the room with her and ask questions, and every answer made me wish I hadn’t asked her. She was so honest and straightforward, and she had said it was going to be a total miracle from the Great Lord for her be alive in three or four months, and then she told us this. She said, “It’s completely gone.”

What was it like to tell the rest of your family and the people you work with on ABP?
It was funny because we couldn’t fit everyone in the room. We had a bunch of crew there, and they’ve become like family to us now, and you could tell the news was just in front of us and everyone we walked by – they could have been the most macho guy – had tears in their eyes and the biggest smile on their faces. That felt really good.

You always accompanied Ami to her treatments. That couldn’t have been easy.
We kind of got to be friends with these people [also getting treatment.] You go in the same days, and you see a lot of them go way downhill, and you go in, and there’s a few of them you’re friends with, and then one day they’re just not there. We’ve been through a lot, and this has to be the hardest thing to face for all of us. But when faith is all you have, you’ve got to hold on to it.

Have you noticed a big improvement in Ami’s strength since her new diagnosis?
We didn’t see improvement until two days after we got the news. [She had been going to treatment through early December.] But now I don’t have to pick her up out of a chair anymore. She’s coming back pretty quick. She’s 104 lbs. as of this morning, and for us that’s a miracle. She held the faith the entire time. She actually got a little upset when we suggested she get on a feeding tube.

Has it been easy for her to gain the weight back?
When we go to bed, we would put out three or four plates of food around her, and she’ll wake up in the middle of the night and get a bite or two.

If the scans hadn’t brought good news, what was the plan for moving forward?
We’d already talked to the doctors about it, and they said they had to give her two months off because her body couldn’t take any more. They had to get her up at least over 100 lbs. So that was the plan: try and get her up over 100 lbs. and in another six months hit her again. We talked about it, too, and we’d already figured, “If that’s the way we have to live, then okay. If she has to go through this every six months just to be with us longer…” I know it’s hard on her, but I think she was ready to do it again.

Do you feel like this chapter is behind you now?
We just want to stay together another day and go back to our lives, but we still have something hanging over our heads because they never found a primary. They never knew where [the cancer originated] from. It was in and around and between all of her chest, lungs and back, but three different doctors told us that wasn’t where it came from. They checked and they couldn’t find it. So that’s the only worry we have now: that it’s still in there somewhere and it will come back. But the Good Lord’s got it. Between Him and the support of the people around us and the people on the street who see us at a red light and just give us a thumbs up or say they’re praying for us, we can get through anything. 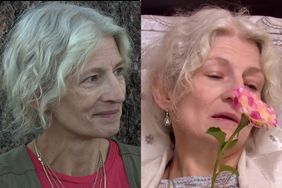