June "Mama June" Shannon's youngest daughter turned 15 on Aug. 28 and received a special gift from the girl group Sorellé, who serenaded the teen by singing "Happy Birthday" a cappella in a personalized video.

"So excited I just got this Happy Birthday video from @sorellemusic !!! I ♥️ them ...Thank you 💋," Honey Boo Boo captioned the post, which was shared to her Instagram over the weekend.

The Dancing with the Stars: Juniors alumna also received some birthday love from WE tv — the network which airs her family's reality series, Mama June: From Not to Hot.

"#HappyBirthday @honeybooboo! Wishing you a slice of happiness! 🍰 #MamaJune," WE tv wrote alongside a photo of Honey Boo Boo standing beside a light-up "Happy Birthday Alana" neon sign.

The past few years have been a bit of a roller coaster ride for the reality star's family, specifically Mama June's battle with drugs.

On an episode of Mama June: Family Crisis earlier this year, her daughter Lauryn "Pumpkin" Shannon, 20, said no one could get in touch with Mama June.

Added Honey Boo Boo, "Or they'll say all their phones are dead and they were sleeping."

In March 2019, Mama June, 41, was arrested on charges of possession of a controlled substance and drug paraphernalia after she allegedly had crack cocaine and a crack pipe on her.

Doak was also arrested and charged with third-degree domestic violence, possession of a controlled substance and possession of drug paraphernalia, PEOPLE previously reported. Both were charged with felonies for drug possession in September of last year, and the couple's attorney entered not guilty pleas on their behalf the following month.

Now, it appears that Mama June is on the road to recovery.

Earlier this month — days ahead of her own birthday — Mama June said that she Geno had hit the six-month milestone in their sober journey.

"Hey guys, real quick I just wanted to jump on here. I know my birthday isn't until Monday, but I want to share this six-month blinged out chip that my manager sent me for my birthday," she said as she showcased the six-month sobriety coin.

"It's probably the most thing I'm proud of," June said, "because now me and Geno are over six months clean." 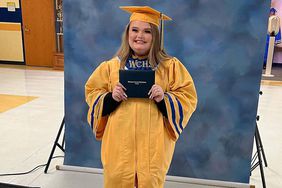