"I got chills all over my body," Sofia Vergara tells PEOPLE about the singer she gave the Golden Buzzer to

Sofia Vergara gave one singer an unforgettable gift on America's Got Talent.

On Tuesday, the actress, 48, pushed the Golden Buzzer for singer Jimmie Herrod after his memorable audition. The Portland native, 30, performed "Tomorrow" from Annie, a song which judge Simon Cowell called the "worst song in the world."

Though Herrod was advised to "do another song," the contestant wowed the panel and the audience with his soulful rendition, later changing Cowell's mind about the song. ("Wow, wow, it's not my worst song anymore, unbelievable," Cowell, 61, said after Herrod's performance.)

Vergara, who is in her second season as an AGT judge, tells PEOPLE about her Golden Buzzer winner and raves about his vocal talents.

"Jimmie's performance was so powerful and he completely blew me away. His voice, his presence, the song — it was all incredible!" the Modern Family alum recalls. "Every part of me just knew that I needed to push the Golden Buzzer. I absolutely loved his performance and he deserved it!"

Vergara adds, "I got chills all over my body. I was so moved that he nearly brought me to tears! It was such a beautiful performance."

After Herrod's audition, Vergara initially tricked everyone by downplaying her reaction to his performance, even when Cowell, Heidi Klum and Howie Mandel all gave him a standing ovation.

"Um, I have to say that I didn't like it that much," Vergara told Herrod as she received audible boos from the crowd.

"I loved it!" she said before slamming the golden button and sending Herrod, who had a celebratory FaceTime with his father, straight to the live shows.

"I didn't think you liked him, you weren't standing up. I thought you hated it," Cowell later told Vergara. "That was unbelievable, that was incredible."

Herrod, who was teaching music virtually to children during the COVID pandemic, earned his bachelor of music degree from Washington's Cornish College of the Arts and his master of music in jazz studies from Portland State University. 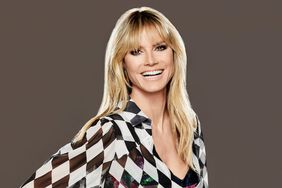