"I hope my Golden Buzzer moment inspires others to never give up on their dreams," Dwyane Wade tells PEOPLE

From the basketball court to a reality competition stage: Dwyane Wade is joining the America’s Got Talent judging panel.

The retired NBA star, who played his final season with the Miami Heat in May, is the second star to serve as a season 14 guest judge — and will sit alongside wife Gabrielle Union.

“Joining my wife as a guest judge on America’s Got Talent was such an incredible experience,” Wade, 37, tells PEOPLE of working with Union, whom he married in August 2014. (They welcomed daughter Kaavia in November 2018.)

“I hope my Golden Buzzer moment inspires others to never give up on their dreams,” Wade says.

In her first season as an AGT judge, Union already made an impact on one lucky contestant’s life, bestowing her Golden Buzzer to 22-year-old singer Kodi Lee, who is blind and has autism.

“For me, whoever I’m going to ultimately be rooting for, whether that was my Golden Buzzer or just acts, I want to remember you beyond the day,” she previously told PEOPLE. “There are some acts that are so special that I say, I want to fall in love. Not just with your ability but with you as a person and root for you, care about you.”

Union added, “To me, that’s what makes a superstar. You can’t just be talented, the world is filled with just talented people. I got to care about the whole operation.” 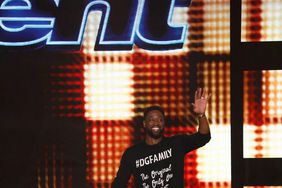