Adam Carolla: Life After Dancing with the Stars

He may have been booted off Dancing with the Stars, but the image of Adam Carolla, in a Zorro costume riding a unicycle, lives on. Two weeks after making a bittersweet exit from the ballroom, PEOPLE caught up with the radio deejay to talk about how he’s coping now that his dance card is empty and which contestant has his vote to take home the disco-ball trophy. –Reagan Alexander

Have there been any signs of Dancing withdrawal?There was a bit of what you might call Stockholm Syndrome, where I actually felt sympathy for and missed my captors after the first couple of days. I feel much like what Patty Hearst must have gone through, with the Symbionese Liberation Front, back in the seventies.

Do you find yourself driving by dance studios late at night?(Laughing) Yes! Parked out front, a single tear in my eye and my pants around my ankles, like some kind of crazed stalker, having a nip off of a flask that I have molded out of one of the Latin dance shoes that I keep in my breast pocket.

Interesting and scary. By the way, where are your dance shoes?(Laughs) I’ve kept, and collected my shoes, and I imagine that I will don them as often as I don the cleats that I wore in high school after I played my last football game, which would be never. Any truth to the rumors that you’ve been repeatedly caught trying to break into the DWTS wardrobe to get your sequin fix?(Laughing) Like they said, ‘Be prepared, you will be bitten by the dance bug.’ It is true, by the time week three rolls around, you’re standing in front of a full-length mirror, with a couple of guys with a mouth full of pins, and you’re saying, ‘Why don’t we bring it in a little bit in the back, and show off my shoulders.’

Any plans for hitting the spray-tanning salons in Hollywood?(Laughs) Oh, yes! I bought a fifty-five gallon drum of Mystic Tan, and I’ve actually found that spraying it on is fine, but you get a thicker coat if you dip yourself. You come out looking like that chick from the beginning of Goldfinger. It’s the same thing that Cristian de la Fuente does. He’s really named Walter, and he’s from Ohio, but he’d kill me if you printed that. Fake accent, fake name, fake tan, fake Air Force–it’s all part of the ruse.

Now that you’re off the show, who are you rooting for?If Cristian doesn’t win, he will kill somebody. He will literally run them through with a fake sword.

And, if Cristian won, there would be less bloodshed, so a vote for the Latin is a vote for public safety?I’m warning America right now! He could run through everyone on that judging panel with a fake sword, be on a plane back to Chile and it would take years to extradite him. That may, in fact, be his plan, so I’m saying, ‘America, unless you want trouble, let’s just go ahead and cast your vote for Cristian.’

'Dancing with the Stars'' New Lineup! 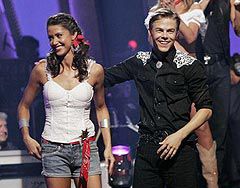 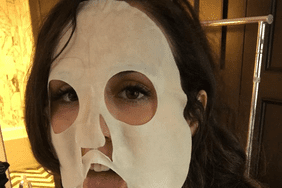