Pull up a chair!

Fox & Friends Weekend co-host Abby Huntsman has officially been chosen to replace Sara Haines on The View, according to a report from Mediaite. Haines announced last month that she will be departing the talk show at the end of the season in order to join Michael Strahan on a new third hour of Good Morning America, which is expected to premiere on Sept. 10.

Fox News confirmed to Mediaite that after this weekend, Huntsman will no longer serve as co-host for the morning show.

A rep for The View had no comment when reached by PEOPLE, but a source says Huntsman has lots of fans at ABC and expected to land at The View.

Sara Haines Enjoys Drinks with The View Co-Hosts Ahead of Exit: ‘Ladies Get Lit Thursdays!’

Two weeks ago, PEOPLE learned that both Huntsman and regular CNN contributor Ana Navarro, both of whom are openly conservative, were at the top of the list of contenders for Haines’ replacement.

Huntsman, the daughter to current U.S. Ambassador to Russia Jon Huntsman Jr., has been with Fox News since 2015, starting out as a reporter before earning her co-anchoring position on Fox & Friends Weekend.

Perhaps owing to her ties to the White House, the conservative media personality tends to take a friendlier tone toward modern administrative affairs — with one rare exception being her slight Twitter rebuke of the president’s words at the Helsinki Summit in mid-July.

RELATED VIDEO: Whoopi Goldberg Gets Into a Screaming Match with Fox News‘ Judge Jeanine Pirro on The View

McCain recently appeared on Watch What Happens Live with Andy Cohen and discussed how she felt about the prospect of having another conservative voice on the show.

“It’s not important to me to have another Republican on the show,” she said. “I think I can hold my own, and I’m very strong.”

However, she added, “Would it be nice? Of course.” 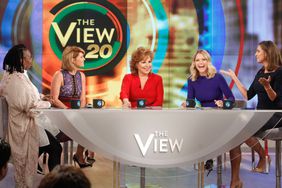