The actress took home the award for outstanding lead actress in a drama series at the 73rd Primetime Emmy Awards on Sunday night for her role in The Crown, beating out Jurnee Smollett (Lovecraft Country), Uzo Aduba (In Treatment), Emma Corrin (The Crown), Elisabeth Moss (The Handmaid's Tale) and Mj Rodriguez (Pose) for the coveted trophy.

Colman took the stage to accept the award, which was presented by Anthony Anderson and Tracee Ellis Ross.

"I would've put money on that not happening," Colman said. "What a lovely end to this extraordinary journey with this lovely family. I loved every second of it and I can't wait to see what happens next."

The actress then grew emotional as she dedicated the award to her dad, who she said died during the COVID-19 health crisis.

"I'm going to be very quick because I'm very teary as my wish my dad was here to see this," she said. "I lost my daddy during COVID, and he would have loved all of this."

The actress starred as Queen Elizabeth II on the hit Netflix series. She went head-to-head with fellow cast member Emma Corrin, who was nominated in the same category for her role as Princess Diana.

The Crown, a historical drama about the reign of Queen Elizabeth II, was created and is principally written by Peter Morgan. Each season takes on a different chapter of Elizabeth's life, from her younger years to her time on the throne.

The series has been critically acclaimed since the start. Most recently, the series took home a top prize at the Screen Actors Guild Awards, winning the award for outstanding performance by an ensemble in a drama series. 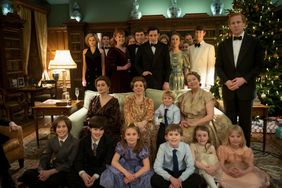