"Man, you're good at acting," Julianne Nicholson said about costar Kate Winslet while accepting the Emmy Award for outstanding supporting actress in a limited series for Mare of Easttown

Julianne Nicholson is an Emmy winner!

During the 73rd Primetime Emmy Awards, the 50-year-old actress took home the Emmy for outstanding supporting actress in a limited series or a movie for her performance in HBO's Mare of Easttown. She beat out fellow nominees Renée Elise Goldsberry, Phillipa Soo, Jean Smart, Moses Ingram, and Kathryn Hahn.

After thanking everyone behind the scenes of the series, Nicholson gave shout-outs to costars Evan Peters (who also won his category) and Jean Smart, plus Kate Winslet.

"Man, you're good at acting," she said with a laugh about Winslet, 45. "Turns out, you're good at caring for a whole production. You led all of us every step of the way with such care and intelligence and love."

"If you hadn't called and asked if I wanted to join you in Philly, I probably would have read the first two episodes, thought 'Nah, the priest did it,' and stayed home. So I owe this to you," she said to Winslet.

This is the first Emmy win for Nicholson, who played Lori Ross in Mare of Easttown.

Also starring Winslet, Guy Pearce, John Douglas Thompson, Peters and Smart — who was nominated in the same category as Nicholson — the crime drama centered on a detective investigating a murder in the outskirts of Philadelphia.

While it was initially created as a limited series, screenwriter Brad Ingelsby previously told The Hollywood Reporter that the door isn't officially closed on having another season of Mare of Easttown.

"It was written as a limited, and it ends — there's no more mystery to be solved. Kate and I, if we could crack a story that we were really proud of and felt like it was a deserving second chapter in Mare's journey, then maybe," he said. "I haven't cracked that yet; I don't know what that is, honestly." 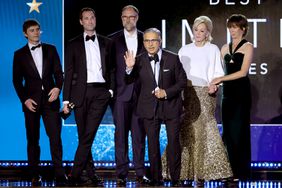