Congrats are in order for Jason Sudeikis!

Sudeikis teared up as he accepted the award.

Zeroing in on his SNL roots, Sudeikis hilariously called out series creator Lorne Michaels for missing his acceptance speech.

"I want to thank Lorne, who went to go take a dump now. Perfect," he joked. "You know, he's going to get home and he's going watch it. He loves watching the Emmys at home. It's fine, it's fine. Which home is the big question."

Sudeikis then continued by thanking his Ted Lasso colleagues.

The father of two added, "I want to thank our COVID crew from this season. I want to thank everybody that's helped us out, my manager Geoff Cheddy — another person that probably falls under all three of those categories. But thank you, again, thank you to the Academy."

Even though Michaels missed Sudeikis' big moment, the pair caught up with each other backstage and they shared a hug.

In the Emmys press room, Michaels, 76, spoke highly of Sudeikis and teased the actor's return to SNL. "I was so happy for Jason," he said. "He'll be coming back soon to SNL. I'm very happy about that."

Sudeikis has been on a winning streak all year long for his role as Ted Lasso. Prior to Sunday's victory, he earned top acting prizes at the Golden Globes, Screen Actors Guild Awards and Critics Choice Awards. The show is also nominated for the outstanding comedy series award.

Recently speaking to The Guardian about playing the lead role, Sudeikis explained how he wanted to take on a character that differed from his typical roles.

"I personally didn't want to play a buffoon, or use our time and our scripts to humanize a bastard — that had been done," Sudeikis said in July. "Ted, the character: he's looking for the best parts of life." 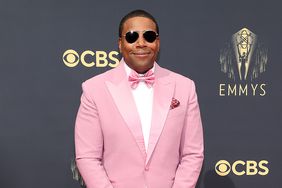