After being postponed twice following the terrorist attacks on 9/11, the 2001 Emmy Awards were held in November 2001 with host Ellen DeGeneres

Ellen DeGeneres hosted the night's festivities, even rocking a replica of Björk's 2001 Oscar dress for the occasion.

Melissa Rivers joined her mother, Joan Rivers, on the carpet.

Gilmore Girls star Lauren Graham accessorized her 2001 Emmys ensemble with perhaps the most 2001 accessory ever: a butterfly clutch.

Business as usual! Jessica Alba went with an all-black, buttoned-up ensemble for the red carpet.

The Dark Angels actress presented an award alongside Jennifer Garner, who was starring in Alias at the time.

Actress Aisha Tyler dressed down her red carpet look, rocking a sequined tube top and black slacks for the awards.

The Votes Are In

The West Wing won outstanding drama series for the second year in a row and the two of the show's stars, Bradley Whitford and Allison Janney, took home awards for outstanding supporting actor/actress in a drama series.

Sex and the City made history by becoming the first premium channel show (it aired on HBO) to win outstanding comedy series!

Malcolm in the Middle became the first comedy to have two different episodes win awards for directing and writing.

Eric McCormack celebrated his outstanding lead actor in a comedy series win with Will & Grace costar Debra Messing, who was also nominated that year.

The Will & Grace star also had a pretty fantastic photo shoot with his Emmy.

Barbra Streisand, who took home the award for individual performance in a variety or music program, closed the show with a performance of "You've Never Walk Alone" to honor the victims of 9/11.

Will 'Housewives' Rule the Emmys? 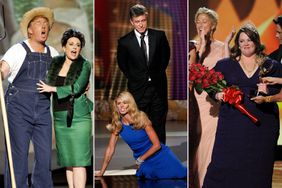 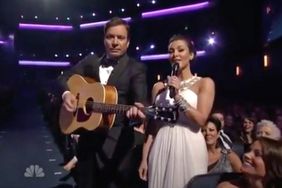