“Both Josiah and Marjorie have enjoyed getting to know each other and to build their friendship over the past months,” the Duggar family and the Jackson family tell PEOPLE in an exclusive statement. “We are so grateful that they each are seeking the Lord’s will for their future. A few weeks ago Marjorie and Josiah agreed to end their courtship, keeping in step with what they believe the Lord’s will is. Both are thankful for the time getting to know each other, and their families continue to enjoy each other’s company and close friendship.”

Josiah, 18, revealed exclusively to PEOPLE that he officially entered into a courtship – a Duggar-approved way of dating that has couples get to know each other in preparation for marriage – with Marjorie, 17, on April 6.

RELATED VIDEO: How Josiah Duggar Took a Cue from Sister Jill When He Started Courting

The two met when Josiah was taking Spanish lessons from Marjorie’s mother, and Josiah told PEOPLE in April, “She really caught my eye. That is really where I noticed her.” 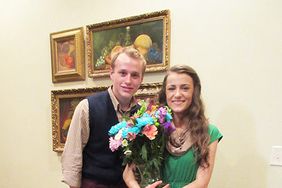