Will Smith is taking on the globe in a once in a lifetime adventure.

On Monday, Disney+ released the trailer for Welcome to Earth. The original series by National Geographic will follow the 53-year-old actor as he starts a journey to visit hidden gems around the world.

"I've got a confession to make. I've never climbed a mountain. Never swum in a lake. I was in a cave once," Smith said in the clip. "I'm beginning to think I might be missing something."

He continued, "We think we know our planet but there's still a secret world to be discovered. If you go to the right place, with the right guide, you just might find a portal into it."

Will Smith Reveals the Title and Cover of His Upcoming Memoir: 'My First Book Ever!'

Smith will have thrilling experiences with elite explorers, visiting places from volcanoes and deserts to the depths of the ocean and having plenty of "bucket list moments" along the way.

Smith shared the news of the project on social media, telling his followers that the series was years in the making.

"When @natgeo calls you with a crazy idea, you JUST SAY YES!! Been working on this one for a few years…," he wrote.

Welcome to Earth premieres this December on Disney+. 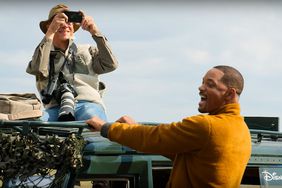