It's Lit! The Retro Main Street Electrical Parade is Returning to Disneyland This Summer

The parade has long been a favorite for Disneyland tourists, who were thrilled to hear of its limited return

This summer is about to be a whole lot brighter at Disneyland.

On Friday, Disney Parks announced on its blog that The Main Street Electrical Parade is returning to Disneyland for a limited time, and fans are over the moon about the return of a Disney classic.

The parade, as Disney notes, is a “spectacular festival pageant of nighttime magic and imagination,” and has long been a favorite of Disneyland visitors, who have been hoping it would return since it was shut down in 2017.

However, park goers will have to visit between August 2 and September 30 to catch the colorful show. The parade will feature nightly performances for its almost two-month run.

The parade was first introduced in 1972 in Disney’s Anaheim, California, park, before closing in 1996. It reopened in 2017, but closed again after 7 months.

Although only on for a short time, the show is bound to dazzle guests with its huge floats and live performers, equipped with a half-million sparkling lights and “electro-syntho-magnetic” musical sounds

Disney’s announcement was immediately well received by fans, who replied to the blog expressing their excitement at the classic attraction’s return.

“Oh my gosh! I’m soooooo happy!!! I love Paint the Night, but there’s nothing like the original MSEP!” one user wrote, referencing another popular Disney parade.

Another added, “Great news. Although SpectroMagic is my favorite night parade of all time, I love MSEP. I always find myself whistling or humming Baroque Hoedown.”

Baroque Hoedown is the theme song for the parade, created by Moog synthesize originators Jean-Jacques Perrey and Gershon Kingsley, also known as Perrey–Kingsley. The song has become a staple for the parade ever since.

“This is AWESOME!” wrote another excited fan. “This is my favorite parade ever, it just feels so nostalgic, so magical. This is the best news I have heard in a long time!”

Along with The Main Street Electrical Parade, Disneyland tourists can get a plethora of thrilling experiences at the park this summer, including a visit to the new 14-acre Star Wars: Galaxy’s Edge land, which recently opened and has become an instant favorite. 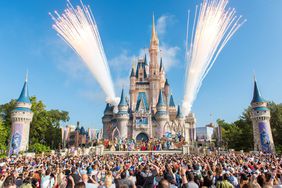