Sorry, Ariel — you can’t keep this iPhone for your undersea collection of “whosits and whatsits.”

Lisa and Jacob Troyer of Montana took a weeklong family vacation to Walt Disney World in October to “fulfill” their daughter Sophie’s “dream, they told macrumors.com.

But on the final night of their stay, things took a turn for the worse. As the family awaited a ferry to leave from Magic Kingdom, Lisa’s cell phone fell from her purse and into the Seven Seas Lagoon.

Her iPhone 11 — containing a week’s worth of her family’s vacation snapshots — sank to the bottom of the man-made body of water.

“I was upset to have lost my phone and the pictures I had taken that evening of Disney’s Halloween party, which had been the main event for our trip,” the mom told the outlet. “Our six-year-old daughter was particularly devastated, as pictures of her and Jack Skellington would never materialize.”

“Instead,” she added, “they sat at the bottom of a lagoon.”

Dream Job Alert! You Could Get Paid $4,000 to Be a Florida Theme Park Tester

Mostly giving up hope for the sunken device, Lisa still gave a statement and her information to Disney World employees, who reportedly told her that divers periodically scour the waters for missing items.

About two months later, Lisa began getting calls from Florida area codes, which she initially dismissed as spam before eventually getting the message that Disney had recovered her phone — and it was still functional!

Once she received the device via mail, Lisa was delighted to find it still intact despite its time underwater. According to Apple, the iPhone 11 is “water resistant up to 2 meters for up to 30 minutes.” Lisa did not disclose whether her device was connected to the Cloud or another automatic storage tool.

The best part, for the family, was the recovery of their photos.

“I was able to retrieve all of the pictures from our Disney Halloween night, and besides some sand in my case and a little algae on the cover, the phone seems no worse for the wear,” she said. 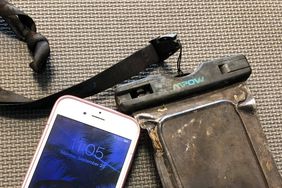 Diver Finds Long-Lost iPhone in River with Texts from Woman's Late Dad — and It Still Works!