"It's their first trip in a long time," a source tells PEOPLE of the couple's getaway

Lori Loughlin and Mossimo Giannulli were "excited" to finally get out of the country on their recent Mexico getaway.

"It's their first trip in a long time," a source tells PEOPLE, referencing the couple's involvement in the college admissions scandal.

"They flew to Cabo with friends," the source explains. "They were excited about the trip."

During one moment from the vacation, Loughlin was spotted sporting a light pink t-shirt with a straw hat and matching bag, while Giannulli donned a dark top and pants alongside a white baseball cap.

Last month, Loughlin and Giannulli asked a judge to grant them permission to travel to Mexico after the parents of two completed their prison sentences.

According to court documents filed and later obtained by PEOPLE, the couple requested to take a five-day trip to San Jose Del Cabo in June "to spend time with family."

Loughlin has already paid her $150,000 fine and completed her community service requirement, to which she was sentenced to 150 hours, according to a travel request filed on her behalf.

Meanwhile, Giannulli has satisfied his fine of $250,000 and "is actively working on completing his community service requirement," a filing on his behalf reads.

According to the criminal complaint against them, the couple paid $500,000 to Rick Singer and Key Worldwide Foundation to falsely designate their daughters, Olivia Jade Giannulli, 21, and Isabella Rose Giannulli, 22, as recruits to the University of Southern California crew team, even though neither ever participated in the sport.

Loughlin started her prison sentence in October and served nearly two months before she was released from the federal correctional facility in Dublin, California, in December.

Giannulli was booked into federal prison on Nov. 19 and was released from home confinement last month, marking the end of his five-month sentence. 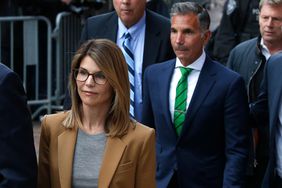