A 22-year-old passenger of Frontier Airlines is facing three misdemeanor charges for battery after he allegedly groped and assaulted flight attendants while the plane was in the air.

Maxwell Berry, 22, was arrested on July 31 after his flight from Philadelphia to Miami on July 31, court records obtained by PEOPLE show.

In a video posted by ABC News' Sam Sweeney, Berry told a flight attendant to "shut the f--- up," before insisting his "parents are worth more than f---ing two million goddamn dollars."

The passenger reportedly ordered three alcoholic drinks and brushed one cup against a female flight attendant "back side inappropriately" as he ordered another drink, a report from the Miami-Dade Police Department obtained by The Washington Post said.

At one point, per the report, Berry spilled his drink on his shirt and then took it off in the bathroom. A flight attendant helped him get a new shirt from his luggage before he began walking around the aircraft for 15 minutes, according to police.

During his time roaming the plane, he reportedly groped another female flight attendant's breasts, the police report noted. He later went behind the two female airline employees "and put his arms around both of them and groped their breasts again."

A male flight attendant intervened and asked the passenger to remain calm and seated, resulting in a punch to his face, the record obtained by the Post said.

The video circulated on social media shows the male flight attendant duct taping Berry to a seat in order to restrain him. Per the police report, the airline employee said he "had to tape him down to the seat and tie him with a seat-belt extender for the remaining flight."

Berry was arrested by Miami-Dade police and released on a 1,500 bond, court records obtained by PEOPLE show. He has no future court appearance scheduled.

There was no legal representation listed for the 22-year-old.

Following the incident, the flight attendants involved in the alleged assault were suspended.

"During a flight from Philadelphia to Miami on July 31, a passenger made inappropriate physical contact with a flight attendant and subsequently physically assaulted another flight attendant. As a result, the passenger needed to be restrained until the flight landed in Miami and law enforcement arrived," Frontier Airlines said in an initial statement to CNN.

The statement continued, "The flight attendants will be, as required in such circumstances, relieved of flying pending completion of an investigation."

The decision to suspend the flight attendants was met with backlash from the Association of Flight Attendants-CWA, the union representing Frontier's airline crew.

"Management suspended the crew as a knee-jerk reaction to a short video clip that did not show the full incident," Association of Flight Attendants-CWA President Sara Nelson said in the statement. "Management should be supporting the crew at this time not suspending them. We will be fighting this with every contractual and legal tool available, but we would hope there will be no need for that as management comes to their senses and supports the people on the frontline charged with keeping all passengers safe."

Frontier later amended its statement regarding its employees involved in the incident with Barry.

"Frontier Airlines maintains the utmost value, respect, concern and support for all of our flight attendants, including those who were assaulted on this flight," a rep for the airline told PEOPLE in a statement. "We are supporting the needs of these team members and are working with law enforcement to fully support the prosecution of the passenger involved."

The spokesperson added, "The inflight crew members' current paid leave status is in line with an event of this nature pending an investigation." 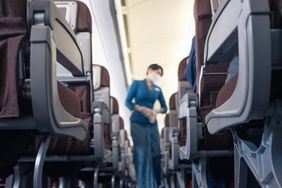