The Broadway has star married his longtime partner Adam Smith, his rep confirms to PEOPLE exclusively.

“We’re looking forward to understanding and learning how to share your life with somebody,” Porter, 47, told PEOPLE Friday in an interview ahead of the wedding. “I’m really thrilled to figure out what that means — together, with my soul mate!”

Decked in Thom Browne and Prada suits, the grooms wed Saturday during an intimate ceremony in Manhattan, exchanging vows — and platinum Cartier bands — at a close friend’s Chelsea penthouse. Afterward, the happy couple and their 45 guests sipped on Champagne and enjoyed sweets from Empire Cakes.

Porter and Smith’s nuptials came just two weeks after the Tony-winning Kinky Boots star popped the question during a romantic dinner in London on Dec. 29.

“We were discussing, and Billy had actually brought up to me that it’s important for us to get married [Barack] Obama is still President and before January 20,” 35-year-old Smith — co-owner of the eyewear company Native Ken — says of their impromptu union. “So we sat down and figured out when we could make it work before the 20th.”

Indeed, it was significant to Porter that they exercise their equal right to marry before Donald Trump‘s Inauguration next week.

“This is an extension of our activist side. It’s still important to show the world what our love looks like; it’s important for us to take that stand,” Porter says. “I think about when I grew up and when I came out in the ’80s: As a black gay man, there were no examples to validate my existence. So I vowed at that age to try to be that for the generations behind me if I had the chance.”

The couple met through mutual friends in 2009. After dating for a year, they split but remained close before finally rekindling their romance in 2015.

Their wedding was something Porter and Smith never imagined when they were being raised in Pittsburgh and outside of Dallas, each says.

“We both grew up in households where who we are is labeled an ‘abomination,'” Porter says. “The thought of marriage, there was no context for it — there was no dreaming about it because there was no context to dream; it was unspoken and very clear that the sanctity of marriage was not for us. So to see that come around, to see that tide turned, it still takes my breath away; I’m still trying to find the words to describe it. I didn’t think I needed it. I lived with this idea that it just wasn’t for us. So when we went to get our marriage license the other day, the act of that was so powerful in a way that crept up on the both of us, and it just grounded that moment.

Adds Smith: “To get to marry the person that you love more than anything is an extraordinary thing, and I finally realized what everyone else has been able to do, I now am able to do myself. And that’s an incredible feeling.” 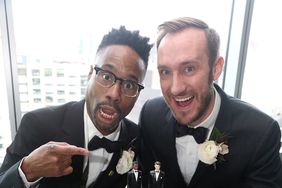 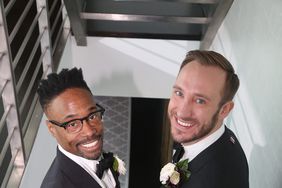