We Tried It: Becoming One of the 'Cats' on Broadway for a Day

PEOPLE reporter Jeff Nelson goes behind the scenes, gets in costume and hits the stage as one of the Cats in New York City

What It Is: Andrew Lloyd Webber‘s iconic musical Cats returned to Broadway this summer, with British chanteuse Leona Lewis making her debut on the Great White Way as Grizabella, The Glamour Cat. (Her run in the show ended last month, and School of Rock actress Mamie Parris has since taken over the “Memory”-making role.) I went behind the scenes at the theater and got a crash course in stage makeup, skin-tight unitards and choreography before making my own debut on a Broadway stage.

Why I Tried It: I’ve always been a fan of musical theater (I’ve seen Wicked a casual five times), but my onstage experience was limited to a few plays in elementary and high school and playing some of the Wise Men in the nativity story in church. Since moving to New York and working at PEOPLE, I’ve gotten some incredible opportunities to get to know the Broadway community, from seeing A Raisin in the Sun a few rows behind POTUS and FLOTUS and attending multiple Tony Awards to going in the recording studio with theater legends for Broadway for Orlando this summer. So when the chance arose to actually hit the stage at the Neil Simon Theatre, I couldn’t pass it up. (Also, I’ve been told I’m a little bit dramatic.)

Level of Difficulty: In real life, I can only imagine starring in this epic production eight times a week would be a 10 out of 10. But, I thankfully had a talented glam team to get my makeup on and costume ready, and the patient cast members I met took it easy on me when it came time to learn the choreography.

What Really Happened: When I first interviewed Leona Lewis about starring in Cats, she told me about how the entire cast learns how to do their own makeup, and that’s part of their process of getting into character. Inspired by the idea, I pitched a makeup tutorial with a Cats stylist to my editors. Fast forward a few weeks, and that idea snow-balled into me not only getting my makeup done but also sport a Spandex body suit and learning some choreography dressed up as the character Bill Bailey

Don’t get me wrong, I’ve loved dressing up since I was a kid. Was I nervous that the unitards are skin-tight and I could stand to lose a few pounds? Yes, certainly, but I take my job seriously and am willing to endure some embarrassment in the name of service journalism/entertainment. What really had me apprehensive on the eve of my Broadway debut were the dance moves, which my producer conveniently forgot to mention until the day before. But whatever.

Upon arriving at the Neil Simon Theatre, I made my way backstage, downstairs and through a snaking hallway of lockers and a warm-up area to the glam room, where I met my new BFF: Cats makeup artist Victoria Tinsman.

As I mentioned earlier, the Cats cast does their own makeup. But because layering on that face cake can take anywhere from 30 minutes to two hours — and they had a matinée on the day of my visit — Victoria did mine for me. The girl is a pro and has worked on musical productions in New York and around the country, so I was in good hands.

After putting my hair back in a wig cap, she applied a base coat with various colored layers and embellishments (cat eye, anyone?), powdering occasionally to not smudge my new feline face. My character, Bill Bailey, has quite the involved makeup regimen, but Victoria sped through it, and I quickly transformed into the tom. Save for a few necessary reapplications —when she told me not to smooch my lips together, I couldn’t help myself…sorry, Victoria! — we were done in 30 minutes, and it was time to put on my wig with some bobby pins.

At this point, I’m fully feline from the neck up, and it’s time to suck it in and slide into that unitard. As I enter my dressing room (read: laundry room bathroom!), one of the nice costume ladies asks me what kind of underwear I’m wearing (Cash Warren/Pair of Thieves trunks, FYI) and offers me what can only be described as a nude girdle (“This way you won’t have ‘bunchies’!” she assures me).

So, off come my clothes, on goes the girdle, up comes the unitard…and, I need some help. Nice Costume Lady joins me in my dressing chamber to pull my upper-body and arms into the Tigger-esque suit.

“I should have worn some Spanx, I guess!” I joke.

“Honey, this is a Spanx bodysuit,” Nice Costume Lady counters.

I’m now snapped in, with all my “curves” and problem areas on display, and she helps me into the rest of my costume — ballet flats and leg warmers (for both legs and arms, because Cats) — and I’m ready to go.

Back upstairs and onto the stage I go, where I meet my dance instructors: Eloise Kropp, who plays Jennyanydots, and Tyler Hanes, who plays my character Bill Bailey, as well as Rum Tum Tugger.

Let’s get this straight: I am not a dancer. I sprained my knee at my first middle school dance, I can’t do “The Electric Slide” at weddings, and I tend to require a little liquid courage just to move my hips in a normal-ish fashion if Ariana Grande‘s “Into You” comes on at a party.

Having informed Eloise and Tyler of my inability to boogie, we got down to it, and they taught me some choreography. Let me be clear: These were probably the most basic, undemanding moves in the show and only involved arm swinging and taking a couple steps, yet the only one I could almost nail was raising my right arm straight in the air, still looking like an open-mouthed fool.

My teachers were good sports about it, though, and nothing but encouraging and patient. They do those steps and some much more involved ones…and memorize lines…and sing songs…all while sweating in skin-tight costumes under hot lights for hours!

Some of the rest of the Cats cast was coming around to the side of the stage (probably wondering who their inept new costar was), so I said my goodbyes and ran downstairs. Victoria snatched my wig off my head, then I stripped out of my unitard (which took all of five seconds) and washed off my makeup, blotting my face with a solution and some cotton swabs and rinsing, and within five minutes, I was fresh-faced and moisturized (seriously, Victoria had my back).

With rehearsals for the matinée about to be underway, it was time for this Cat to return to the alley (er, 52nd Street) and catch a cab back to the office.

The entire process was enlightening — long story short, it takes a ridiculously talented village to put on a show — and I left exhausted and with a new appreciation and respect for musical theater casts and crews.

Thanks for my Broadway “Memory,” Cats.

Watch the video above to see how I did, and go see Cats on Broadway (for more on tickets and showtimes, click here). 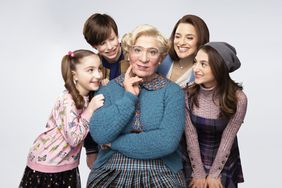