The visionary designer and fashion force died on Nov. 28, 2021 after a private two-year battle with cancer. Look back at Abloh's meteoric rise, from Fendi intern to founder of boundary breaking streetwear label Off-White to the first Black artistic director of Louis Vuitton menswear

Virgil Abloh died at age 41 after a private two-year battle with cancer, PEOPLE confirmed on Nov. 28.

The pioneering designer was diagnosed with "a rare, aggressive form of cancer" called cardiac angiosarcoma, his family revealed in a statement posted to Abloh's Instagram page.

He is survived by his wife Shannon Abloh, children Lowe Abloh and Grey Abloh, sister Edwina Abloh, and parents Nee and Eunice Abloh, per the family's statement.

Here, we look back at the impactful and inventive designer's life and career in photos.

Born outside of Chicago to Ghanian parents on Sept. 30, 1980, Abloh began making waves in the fashion industry when he founded Off-White in 2012, later continuing to share his vision as artistic director of Louis Vuitton's menswear collection.

Abloh had already been on the scene for years before launching Off-White, having interned at Fendi in Rome alongside Kanye West in 2009.

That same year, Abloh, West and a group of fellow fashion-obsessed friends made headlines for a particularly notable street style moment during Paris Fashion Week.

Speaking to W Magazine, Abloh recalled, "We were a generation that was interested in fashion and weren't supposed to be there. We saw this as our chance to participate and make current culture. In a lot of ways, it felt like we were bringing more excitement than the industry was." He soon took on the official role as West's creative director at Donda.

The designer celebrates Off-White's 'You Cut Me Off' Menswear Fall/Winter 2016-2017 show alongside model Ian Connor during Paris Fashion Week in January 2016.

Alongside his career as an artist and designer, multi-hyphenate Abloh pursued music throughout his life. Over two decades, he DJ'd at clubs across the U.S. and at festivals at home and abroad. Here, he spins at the G-Shock White Out Party in May 2016 in N.Y.C.

Speaking to High Snobiety about DJing in 2018, he explained, "At all times, I'll be myself. But, in a way, the enjoyment of playing in Europe is that I'm not DJing in America. Not to knock it, but American clubs are usually bottle-service clubs," he said. "There's a different barometer, so I like to be able to bring what I do from America into a European setting, like a little bit of rap, house, techno. But essentially I'm just playing anything I feel like."

The designer thanks the audience after his 2017 Spring/Summer ready-to-wear show in Paris in September 2016.

A champion of creating more opportunity for the youth, and particularly for Black talent, Abloh went on to launch a mentorship series in 2020 called "Free Game."

"As part of my longstanding initiative to see design, art and culture more inclusive to young Black designers and those coming from non-traditional backgrounds, I wanted to assist in providing the means for them to advance on the road to ownership of their ideas and brands," he explained of the new platform, according to Vogue.

Abloh thanks the audience after the Off-White Autumn/Winter 2017 show during PFW in March 2017. The show saw the runway transformed into an enchanted forest.

Abloh and pal Bella Hadid pose together at the 2017 CFDA Fashion Awards, held in June in N.Y.C.

Reflecting on his death, the model wrote on Instagram, "He was someone to everyone. That was the magic power he held."

She continued, "He made every person he came across feel special in whatever way he possibly could. Even when the world felt sad, he brought laughter and color and beauty. The way he made a positive impact on anything he touched, and always pushed for his culture/the world is the reason why he was an angel on earth and one to so many. The most beautiful warrior soul. I can't believe this."

The king of streetwear stands beside supermodel Naomi Campbell after his Off-White Spring Summer 2018 show during Paris Fashion Week in September 2017.

Abloh earned GQ's prestigious International Designer of the Year award in November 2017 in Sydney, Australia. Dedicating the award to the friends and family sitting with him at this table, he also gave a bit of advice after his acceptance speech.

"The number one piece of advice I would give is to strive for authenticity," he said. "Your own struggles are actually your own mechanism to succeed. That's what I used in my work and I think it will 100% work without fail for anyone."

Hailey Baldwin presents Abloh with the Urban Luxe award for Off-White at The British Fashion Awards in London in December 2017.

"Anyone that knows me knows that I couldn't be more shocked," he says in his acceptance speech. "We're basically kids that sit on a bench and skateboard and listen to music and love fashion. The fact that this award and this category exists means that there's a bunch of kids outside here that probably couldn't get in, that want to participate — and this community has decided that they can participate."

Abloh flashes the peace sign after the presentation of his January 2018 Off-White Fall/Winter 2018/19 Men's collection during PFW.

Two months later, the visionary designer stands before the models after his March 2018 Off-White show in Paris.

Jenner paid tribute to her friend's life on Instagram, sharing a series of photos and videos of the pair. "We have lost a dear friend," she wrote. "No words do my feelings justice at this very moment, but what i can say is that i am absolutely heartbroken. for his family, his kids, his wife, and anyone who cared for him deeply."

She continued, "V taught me and all of us a very important lesson, although he knew he had only so long, he was bright, he was kind & he was full of love. we all need a little bit of Virgil in us. he leaves us with his influence, to create and change the world. you did just that Virg."

Appointed as artistic director of Louis Vuitton's menswear collections in March 2018, Abloh made history as the first Black designer to ever hold the position.

He showed his debut collection at the label's spring/summer 2019 menswear show in Paris. In an emotional clip, Abloh and longtime friend and collaborator Kanye West are seen hugging and crying as Abloh passed by the rapper and his then-wife Kim Kardashian West during his final bow.

Abloh takes the stage beside models Adut Akech, sisters Gigi and Bella Hadid, as well as Karlie Kloss to close out his Off-White Ready to Wear fashion show during PFW in February 2019.

Abloh stands beside pal Gigi Hadid as he thanks the audience after Off-White's Spring/Summer 2020 show in Paris in June 2019.

He and Hadid hit the 2019 CFDA Fashion Awards together earlier that month in Brooklyn, New York.

The model paid tribute to her late friend on Instagram after learning of his death.

"I am heartbroken by the loss of my dear friend, and a friend to the world, Virgil Abloh," she wrote. "He was 1 of 1."

"His kindness and energetic generosity left a lasting impression on every life he touched— he made everyone feel seen and special," she continued. He will be deeply missed, cherished, and celebrated by me and all the people and industries that have been lucky enough to work around & know the true supernova behind this man."

She added, "I picture him now like our Mickey Mouse .. forever with us, forever adored, forever magical, forever guiding us with that special Virgil FUN; I'm sure that's how he wanted to be remembered, but still it will never be the same without him in the room."

"I want to speak to the generation presiding. But I also want a young generation to come in and know, hey, there's someone here who's listening and speaking back to them," he previously told Vogue ahead of his first show for the fashion house in 2018.

Abloh makes a statement as he arrives at a dinner at Fondation Louis Vuitton during Paris Fashion Week in July 2021.

The designer wears a Louis Vuitton ensemble printed with the word "Modernism" at the 2021 Met Gala, themed "In America: A Lexicon of Fashion" on September 13.

The designer spoke onstage during a #QatarCreates talk on Nov. 4, 2021, as part of the cultural celebration at the intersection of art, fashion and design in Doha, Qatar.

Abloh's last public appearance came on Nov. 4, 2021, at the opening of his exhibition "Figures of Speech" in Doha. 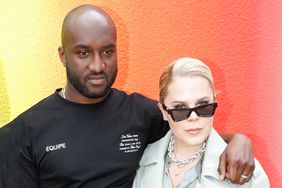 Virgil Abloh's Widow Opens Up About Their Private Life: 'I Knew Every Inch of Him' 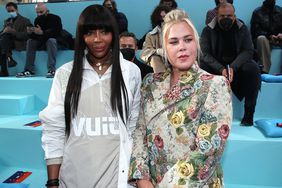 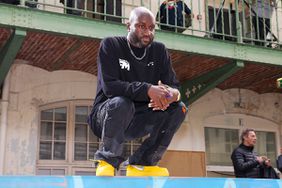 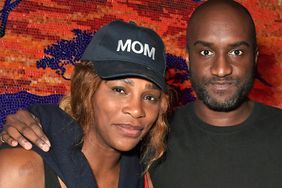 Serena Williams Pays Tribute to Virgil Abloh 1 Year After His Death: 'Still Miss You All the Time'