These are the beauty products the designer swears by

As someone who notoriously eats the exact same thing every day to get her dewy complexion (it’s salmon) and rigorously works out for two hours a day (it’s true!), Victoria Beckham is clearly a creature of habit – and even more clearly, it works for her. So when she shared her daily beauty routine with Into the Gloss, we knew that it would be both rigorously tested and darn near miracle-working.

The clothing designer (who at the time was promoting her own Estée Lauder cosmetics line) walked through her entire product arsenal with Into the Gloss, from skincare to makeup and hair products. She says that as she’s aged, her beauty regimen has gotten less complicated, thanks to more settled skin and fewer wacky looks from her Spice Girls days.

“I used to have quite bad skin when I was younger and I was constantly covering up spots and things like that. Luckily, I don’t have to worry too much about that anymore. Over time, you learn what works for you,” she explains. “And, you know, I tried some interesting looks in the Spice Girls. At this point, I’ve done so many photoshoots and red carpets that I’ve learned so much about my beauty style by looking back at pictures of myself.”

Below, we broke down each product she uses so you can shop them too!

If you’ve noticed that Beckham looks just as radiant in her airport paparazzi photos post-flight as she does on the red carpet, that’s because she gives herself a mini-facial in flight. She cleanses her skin and puts on Sarah Chapman's Skinesis Stem Cell Collagen Activator ($265) which makes her skin feel “so nice” in the “horrific” airplane air. Then she uses her very own Estée Lauder Morning Aura primer ($95, now out of stock) which she developed specifically to look refreshed when facing the paparazzi after a long flight. (Just one of the perks of having your own beauty line!)

As for her everyday routine, she starts with Bioderma makeup wipes ($9.90) which she wears actually work to take off long-lasting makeup. Then she follows it up with a rotating variety of cleansers, including Sarah Chapman's Ultimate Cleanse ($75) and Lancer Skincare's Method Polish ($75), the latter of which she tells the website is “grainy and abrasive” and is the best scrub she’s tried because “it really stimulates the skin.”

She follows that up with the Sarah Chapman 3D Moisture Infusion Mask ($84), a jade roller ($90) and La Mer's Moisturizing Soft Lotion ($260) which she loves because it’s light enough to soak in before her foundation.

Her number one go-to makeup product is her Estée Lauder Aura Gloss ($45, now sold out). She describes it like a lip balm but she uses it everywhere. “I’ll put it on top of my cheeks, on my eyelids, down the center of my nose, and always on this bow of my lip because it makes the lips look fuller,” she explains. “Also a little bit on my chin. Sometimes if I’m wearing something strapless, I’ll take a little bit, mix it with my moisturizer, and put it on my collarbone. You can do everything with it—it has this nice gold feeling that makes it a good highlighter.” (She also put it on models in her latest runway show.)

For days she’s just padding around the house, she puts on a tinted moisturizer from Sarah Chapman, Skin Insurance SPF 30 ($67). And for days she needs more coverage, it’s between Burberry Fresh Glow Foundation ($52), Cashmere Concealer ($40) and La Mer foundation ($110).

VIDEO: Victoria Beckham Thanks Husband David in ‘Glamour’ Women of the Year Speech

When it comes to fragrance, she says she doesn’t have a signature scent, and uses anything by Byredo ($150), but as for moisturizing cream, she loves Weleda Skin Food ($19). “The formula is so thick and buttery,” she says. “When I have a tan, I’ll mix it with coconut oil—the same you use to cook with—and cover my entire body with it. I suppose some people may not like the greasiness, but it helps me hold on to the color. And by the time I leave the house, I feel as if it’s really sunk in.”

She also posted two body-care products to her Instagram in December – the OSEA Undaria Algae Oil ($48), which she said she applies right out of the shower, and Kanebo Sensai bronzing gel ($34) to amp up one’s glow in the pasty winter months.

She admitted that she can’t do her own hair as well as her own makeup, and says she only lets her L.A. colorist touch her strands. And no one is allowed to touch her brows besides Anastasia Soare, founder of Anastasia Beverly Hills. So the products she uses daily on her own include a simple shampoo ($44) and conditioner ($46) by Oribe which she says smells “incredible.”

Even when she’s on the go, she makes sure that she packs with her Skinade’s ($150) travel size flavored anti-aging collagen drink that can improve the appearance and feeling of your skin in as little as 30 days. A holy grail product in her beauty routine, she makes sure she doesn’t go a day without taking it. “My Skinade, which I make sure I take everyday. It comes in bottles that you can keep in the fridge, and it also comes in handy little travel packets.” 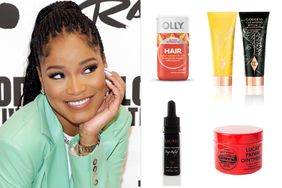 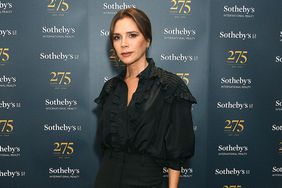 Victoria Beckham Says She's Not Trying to Look Any Younger: 'I Like How Getting Older Feels' 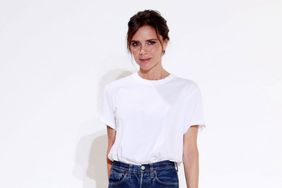 Victoria Beckham on Wearing Jeans (!) at Her Fashion Show, Her Latest Makeup Drop and Why She's Back in Heels 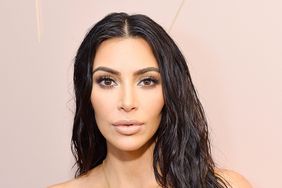 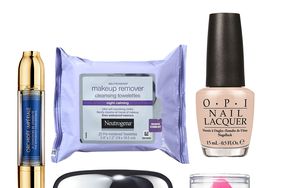 Victoria Beckham Has a Posh New Makeup Collection with Estée Lauder! We're Crossing Our Fingers for These Three Products 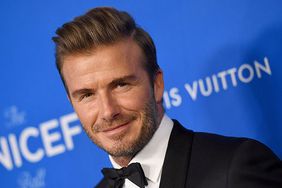 David Beckham Is Expanding His Beauty Empire With a Skincare Line 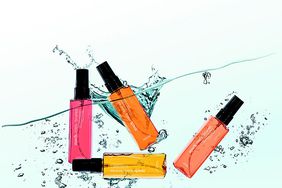 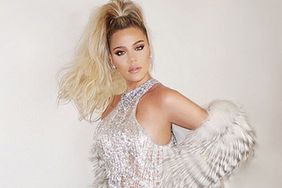 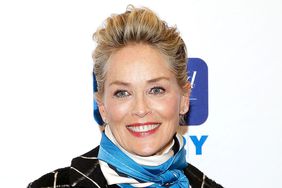 Sharon Stone, 59, on Cutting Her Own Hair, the Lipstick That Withstands 'Surprise' Kisses and More 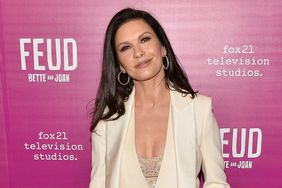