Valentino: The Fashion Emperor Rules in a New Documentary

If you’re the boss, you get to bring your dog to the office. Make that dogs plural. Valentino Garavani, the Italian fashion designer who reigned for 45 years before his retirement in September 2007, never went anywhere without his six adorable pet pugs. They, along with celebrity fans such as Gwyneth Paltrow, Anne Hathaway, Elizabeth Hurley and Sarah Jessica Parker, all turn up in Valentino: the Last Emperor, a fascinating new documentary about the designer. Filmed during the final two years of Valentino’s career, Last Emperor shows him at work and at play, accompanied by Giancarlo Giammetti, his even-tempered business and life partner, in Paris, Rome, London, New York City, Gstaad and aboard their luxury yacht. The secret to his long success? “I know what women want,” Valentino says. “They want to be beautiful.” As amply demonstrated here, in his clothes, they were. The movie opens in New York City on March 18 and in L.A. on April 3 and then expands elsewhere. For more information, go to valentinomovie.com. –Leah Rozen, PEOPLE movie critic 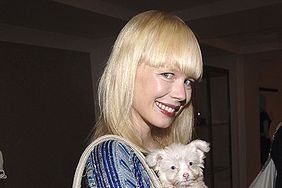