Tom Brady: Gisele Leaves My Hairstyles to Me

"She likes pretty much what I like," he tells Sports Illustrated

In 2010, Tom Brady implied that wife Gisele Bündchen was behind his then-lengthy hairstyle. But two years later, he’s changing his tune.

“She likes pretty much what I like. She leaves it to me,” he says in an interview with Sports Illustrated. “Every man should know, if you’re comfortable and you like it, you should do it.”

The New England Patriots Quarterback has tried a whole myriad of hairstyles in a short period of time: the Bieber, a ponytail, long hair, short hair and most recently at the Met Gala, a faux hawk (“Just a little different haircut,” he calls it). But he says he makes the changes for himself.

“Everyone always worries about what the girls think, what the guys think,” he continues. “If you like it, do it. To me, if you’re trying to impress a girl, get a date, they’re gonna like that more because you’re a confident guy. That’s what it comes down to.”

However, just because he’s made every haircut decision for himself doesn’t mean he’s liked every look. When asked about watching himself singing “Call Me Maybe” in a new mash-up video created this week, he jokes, “I’ve had a lot of ridiculous haircuts. That’s what I’ve realized.” Tell us: Do you appreciate a guy who gets creative with his hair?

TRY ON STARS’ HAIRSTYLES IN OUR INSTANT MAKEOVER

Tom Brady Debuts New Do at the Met Gala 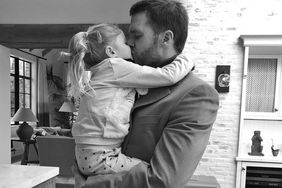 Tom Brady on His Long Hair: 'I Don't Take it Too Seriously'

Tom Brady's Long Locks: A Labor of Love for Gisele