Theo James Is the Face of Hugo Boss' Latest Scent: Go Behind the Scenes of His Sexy New Campaign

See the behind-the-scenes shots of the star's campaign shoot

You know him as “Four” in the wildly popular Divergent series, but now, Theo James has landed his own (sexy) gig as the new brand ambassador of Boss Parfums’ newest fragrance, Boss the Scent. The actor stars alongside supermodel Natasha Poly in the new campaign. Heads up, it’s a steamy one.

Described as “seductive and unforgettable,” the images illustrate the “perfect balance between confidence and nonchalance,” and feature the star sharply dressed in a suit and tie, as he gives off the best Blue Steel vibes we’ve ever seen. (Seriously, though, he’s gorgeous.)

“I’m honored to be representing BOSS Parfums as an ambassador in their latest perfume campaign,” James said in a statement. “I have for a long time admired BOSS for achieving the perfect balance between the classic and the contemporary. This campaign encapsulates the iconic spirit of the brand and reflects my own tastes and attitudes towards a truly unique fragrance.”

The seductive scent is touted as a mix of ginger, lavender and its hero ingredient, Maninka fruit, which also happens to be an aphrodisiac. So it’s no surprise wearing a scent — and this scent specifically — is a regular part of his everyday routine.

“I think how you smell is very important,” he tells PEOPLE. “I think it becomes a part of you as a person, and people recognize you for that smell.”

So where does the actor apply his fragrance? In a totally unexpected place, actually.

“I am classic,” he tells PEOPLE. “A bit on the wrists and then on the sides of the neck — the back of the neck is where it is, actually.”

Along with appearing in the print ads, James also stars in a TV spot for the scent, created by Oscar-nominated director Darren Aronofsky, and featuring music by The Weeknd.

In the sultry clip, the actor gets really intimate with the supermodel. Check it out below and find out exactly what happens after James sprays himself with the sexy new scent.

Boss the Scent will be available exclusively at Macy’s for $85 for 100 mL.

What do you think of the actor’s new campaign ad? Share below!

Gerard Butler Is the New Face of Hugo Boss Fragrance: 'It Makes Me Feel Put Together'

EXCLUSIVE: Katy Perry Goes Wild Behind the Scenes at Her Purr Fragrance Shoot 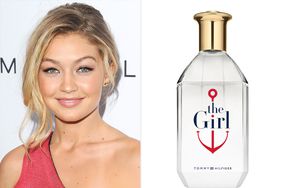 Smell Like Gigi Hadid, Taylor Swift and All Your Favorite Celebs in Their Go-To Perfumes